7 Of The Most Common Gas Valve Problems On Modern Boilers

The boiler gas valve problems and faults, here we have Q & A or require an engineer for an emergency boiler repair. 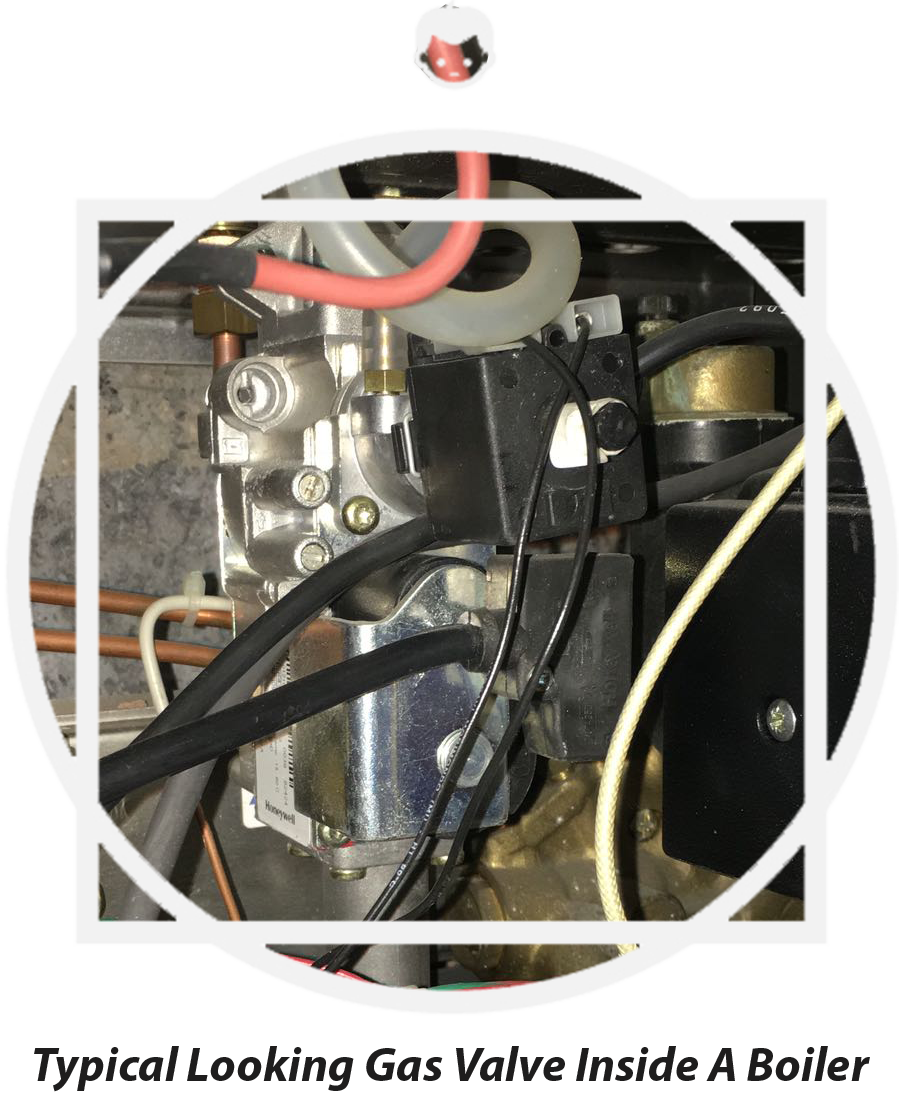 In this article, we’ll cover the most common problems with gas valves, any available fixes, and what you should expect to pay in terms of repair costs.

Boilers are gas appliances and should be worked on by Gas Safe registered boiler repair companies. If you work on a boiler without this accreditation, it’s not just dangerous, in many cases, it’s illegal.

So, always speak to a Gas Safe heating engineer, and don’t attempt to fix your boiler on a DIY basis.

Is my boiler dangerous if there is a fault with the gas valve?

Any boiler fault is potentially dangerous, especially any problem that relates to gas. However, your boiler should lock out and display a fault code when it notices a problem.

The lock out function in modern boilers is designed with two things in mind. For some faults, the boiler locks out to protect important boiler components from damage (for instance, lack of water, causing the pump to work harder than it should). But, when your boiler locks out due to a gas valve fault, the idea is to make your boiler safe; continued operation could mean gas is being leaked into the burner.

And for this reason, you shouldn’t attempt to reset your boiler. On some occasions, a reset might allow the boiler to operate for a few minutes, before the printed circuit board (PCB) recognises the fault is still present and locks out the boiler again.

Resetting your boiler should only be done when the problem has been found and fixed. Call a Gas Safe engineer and leave the fixing and resetting of your boiler, to them.

How a gas valve works

Without a fully functional gas valve, you won’t have a fully functional boiler either. Whilst the meter regulates the flow of gas into the mains and to the boiler, it’s the gas valve that controls the flow of gas into the burner and pilot jet. When there’s a problem, this supply can be interrupted, causing faults that relate to a lack of flame, loss of flame, or flame instability.

Before any of this happens, your boiler’s PCB wants to see a signal that the fan is operational. It’s the fan in your boiler that helps to push dangerous gases out of the flue. If the fan isn’t operational, the air pressure switch feeds back this information to the PCB, and the boiler will lock out.

All being well, your gas valve should adjust to suit hot water and heating demand.

What, what could be wrong with your gas valve?

The gas valve on your boiler will open and close, attempting to provide the burner with the correct level of gas. However, that’s not possible if it’s been incorrectly adjusted.

If someone has previously tried to fix a gas valve fault, it’s likely they may have tried to change the adjustment on the valve. If this wasn’t the problem, and they failed to put the valve adjustment back to its original setting, this is what could be causing the fault.

Likewise, many gas valves are generic. In some circumstances, there’s a chance that the pre-set adjustment of the valve that’s come from the manufacturer, isn’t what it should be for the boiler it’s been fitted too.

You’ll need to get a Gas Safe boiler repair company to come and assess the situation with the valve. And, make sure it’s a company that specialises in repairs. Across many online forums, you’ll see various horror stories, where homeowners have replaced the gas valve, and even the PCB, only to find that the problem hasn’t been fixed.

A specialist boiler repair company will be able to test the valve and monitor it after every adjustment to make sure that this is the problem. If it is, they’ll be able to assign the correct level of adjustment and reset your boiler to clear any fault codes being displayed, so your boiler is fully functional once more.

Another frequent problem with gas valves, is them not closing properly. If there’s a closure fault with your valve, that’s going to mean that it’s “letting-by”. Essentially, that means gas is leaking into your boiler’s burner, when it shouldn’t be.

If this is the case, you might see a range of fault codes being displayed. They could to relate to the gas valve being stuck, letting-by, or more frequently, something along the lines of “flame detection, even when there’s no demand for gas”.

As you can imagine, a gas valve that’s leaking gas into your boiler isn’t safe at all. Call a boiler repair company and turn off your appliance.

The problem here, is the gas valve might still be stuck open. If you can smell gas, it’s wise to turn off your gas at the mains. The mains gas lever is usually located next to your gas meter (it’s most likely yellow).

Once your emergency boiler repair company arrives, they’ll check over the gas valve. It’s most likely that the valve is sticking and can be freed. However, they’ll need to rule out wiring, connections and the PCB. If any of these are unsecure or faulty, they could be providing the wrong signals to the gas valve.

In most scenarios, the gas valve can be freed and refitted. However, if the valve is showing signs of excessive wear, it makes more sense to replace it, as a safety precaution.

The first thing your boiler repair company will want to do, is run a quick visual inspection. The focus is the wiring harness between the gas valve and the main PCB. If this section of wiring is even slightly damaged, the signals are going to be illegible for both components.

If a visual inspection doesn’t help pin-point the problem, your boiler repair engineer will need to inspect each section of wiring, and each individual connection. They’ll be able to test both, using a multi-meter. If they find any section of wiring damaged, connections loose, or faulty components, they’re going to need to be replaced for the gas valve for be operational.

As we’ve already mentioned, not all boiler faults are what they seem. If your boiler repair company suspects a fault, they should always test other aspects of the boiler as well. Whilst it might seem like the gas valve is incorrectly adjusted, not responding, or letting-by, this might be due to the signals it’s being given by the PCB.

The PCB is the heart of your boiler. Without it, your boiler won’t work. If you’ve noticed a whole host of other problems alongside a gas valve related fault code being shown, the PCB could be the culprit. You might have noticed the LED lights on the display panel flashing, the boiler cutting out before getting up to temperature, and hot water working when the heating doesn’t (and vice-versa).

Like the gas valve, the PCB can be tested using a multi-meter. If there’s a problem with communication or power with the PCB, this could be the root cause of the problem. Although the gas valve may also be at fault, the PCB needs to be fixed too. And, due to the cost of a PCB replacement (upwards of £450), combined with a gas valve fix or replacement, you’ll need to think carefully as to whether a replacement boiler might be the better option.

The closure fault mentioned above, could be due to an electronic issue, but it also could be to do with the gas valve sticking.

Gas valves are mechanical components and do wear over time. And, as they start to wear, they become prone to sticking. They don’t just stick partially open (letting-by), they can get stuck in any position (fully closed/open).

If your gas valve has only recently started having issues with the sticking (in any position), there’s a good chance it can be salvaged. Your boiler repair company will be able to take apart the valve and hopefully, they can free it to a point where it operates smoothly again.

However, this is a key component that can lead to gas letting-by (in the case of a closure fault). So, if your emergency boiler company isn’t sure that the problem is fixed, it’s likely they’re going to suggest that you replace the valve.

If your gas valve has already had issues with sticking, the next stage of wear, is a complete seizure. Instead of occasionally causing issues, restricting the flow of gas, or providing too much, it’s going to stick or seize completely. That means it’s going to stick open (providing high levels of gas supply, even when it’s not needed), or completely closed (providing no gas supply, when it is needed).

In this scenario, it’s likely the valve is beyond repair. It’s too risky to repair a valve that is showing signs of excessive wear. Not only this, it’s likely that even if freed, the problem (sticking, as a minimum), is going to happen again soon. It makes little sense to spend money on labour, only to have a repair company back to then replace the valve.

Gas valves last for years, so once a replacement is fitted, it’s likely to outlast the boiler, unlike a repair on an excessively worn part.

If all else fails, it’s likely the valve is faulty, or beyond repair. That’s going to be the case if wiring and connections are damaged, leading to lack of power, as well as the valve sticking. Due to the cost of labour, the cost of a repair in this case isn’t a financially viable option. A much better option would be to get your boiler repair company to replace the valve.

How much does it cost to replace the gas valve?

Although there are many scenarios where the gas valve on your boiler can be fixed, that’s not always going to be the case. Even when there’s a small possibility of a repair, it’s unlikely your boiler engineer is going to take the risk, especially when this part is one that can essentially, end up in a boiler letting-by gas.

If you do need a replacement, you should expect to pay somewhere in the region of £300, including parts and labour.

And, we say £300, because the cost of parts for different boilers, varies a great deal.

For instance, a gas valve (parts only) for a Vaillant EcoTec 28, will cost around £170. On the flip side, gas valves for Glow-Worm boilers can be as cheap as £100. So, the cost of parts is going to have a direct impact on the cost of the overall valve replacement.

If you require an emergency call out for your boiler repair, the cost can vary depending on the time you require an engineer to visit and the company your using in question.

Should I replace my boiler?

As a final note, you should always consult your boiler engineer before replacing parts, or your boiler. If the gas valve is the only component causing issues, it’s likely a £300 replacement valve (or, a cheaper repair), is the most financially viable option.

However, if your boiler is old, out of warranty, and has problems with other parts, it’s likely a replacement is the most financially viable option. Ask your boiler engineer to inspect other expensive parts and asses their condition, before deciding.

The parts they should be checking include:

If the gas valve and 2 or more of these other parts are in poor condition and your boiler is out of warranty, it’s likely a boiler replacement is the most cost-effective solution, not a repair.