8 common faults we come across with boiler PCBs

The boiler PCB problems and faults, here we have Q & A or require an engineer for an emergency boiler repair. 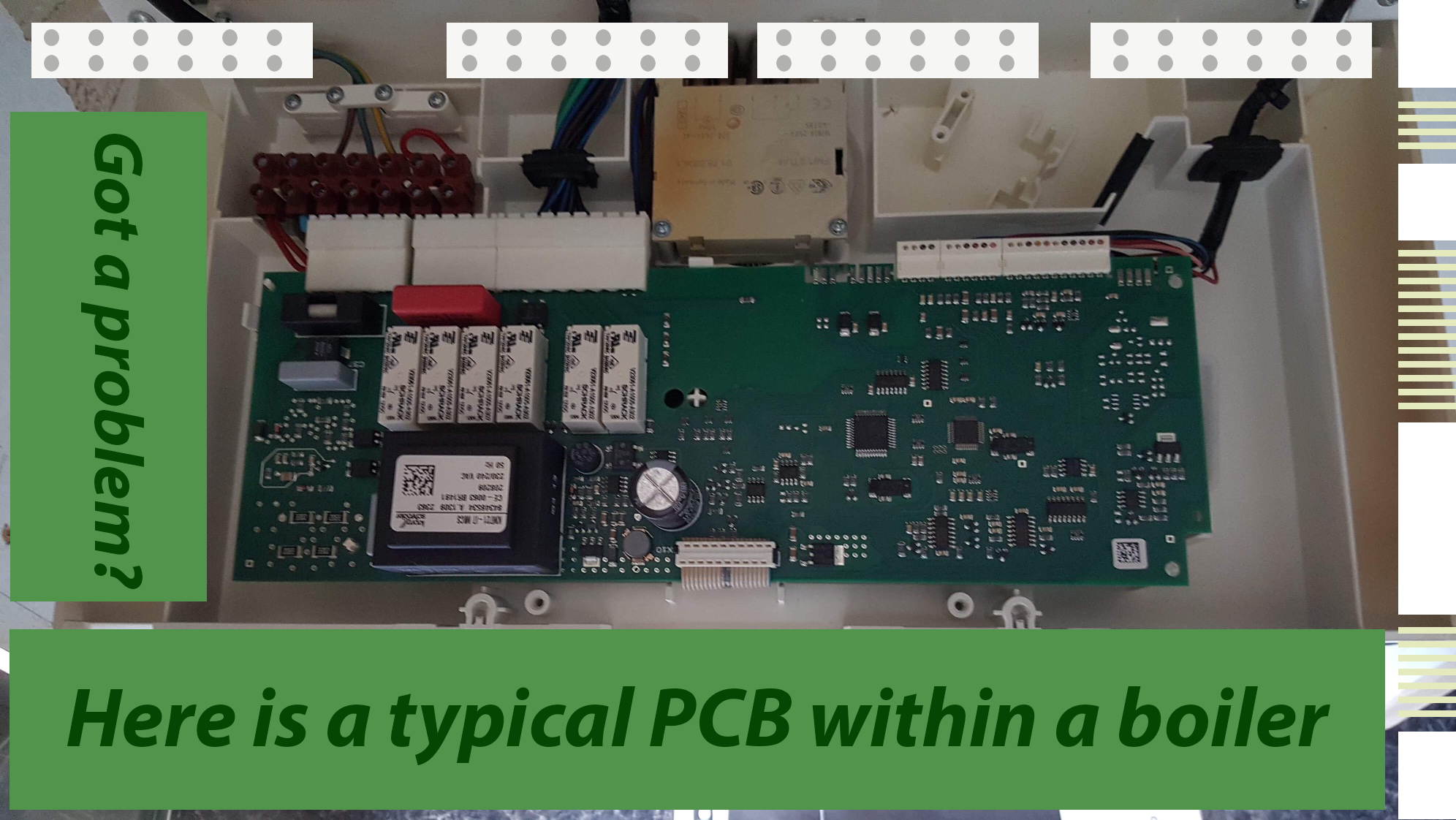 In this article, we’re going to cover the most common printed circuit board (PCB) faults we encounter, when called out to emergency boiler repairs.

The PCB is what makes all electronic components in your boiler interconnect, allowing your boiler to work efficiently.

As an example, before the boiler ignites, it sends a signal for the fan to start. It wants to see an air pressure change from the air pressure switch, to confirm the fan is running, before igniting. That’s because the fan is the component taking harmful gases from your boiler, via the flue.

When the fan is running, the gas valve can open and supply enough gas to the burner, which is then ignited using a spark generator.

The PCB constantly monitors a range of sensors and gauges. This ensures that the boiler is always working within tolerances in terms of temperatures and pressures. As soon as it notices an oddity (for example, an air pressure fluctuation due to a blocked condensate, flue, or a faulty fan), it will lock out and display a fault code.

Can I reset my boiler to fix the PCB?

Your boiler has locked out and displayed a fault code for a reason, and that’s not to simply reset the boiler.

The lock out itself (the boiler will stop working), is a safety precaution. Your boiler is either protecting itself (continued operation might damage expensive components, like the heat exchanger and pump), or the people in the property (for example, in the event of a gas valve letting-by/leaking).

For that reason, you shouldn’t reset your boiler. Leave the job of fixing the appliance to a Gas Safe registered repair company. Once they’re happy the problem is solved, they’ll reset your boiler, on your behalf.

If there’s a problem with your PCB, the first thing you’re likely to notice, is that the display panel works intermittently, at best. That’s going to result in LED lights going on and off, and sometimes, the functions of the control panel not working correctly.

The most probable cause of the issue here, is damage to the wiring that connects the PCB with the user interface.

Your Gas Safe boiler repair engineer will need to remove the boiler’s casing, to access the back of the display panel. Here, they can check the wiring and connections visually. If there are obvious signs of loose or damaged connections, these are going to need to be repaired, or re-secured.

Assuming this is the only problem with the PCB, it’s likely that a repair, rather than a replacement PCB or boiler, is going to be the most financially viable option.

ut, your boiler might not just be suffering with one PCB related issue. With many old boilers, we find that there are multiple problems, including the boiler cutting out, before heating and hot water get up to temperature. This might result in the boiler constantly cycling on and off.

Not only is this extremely annoying for a homeowner, it’s putting extreme pressure on boiler components. So, if this isn’t fixed, it’s likely to lead to other expensive parts needing a replacement (or at the very minimum, repairing).

Like the display panel fault mentioned above, it’s likely that this too, is a wiring issue (in fact, most problems with PCBs, are). Your boiler engineer will want to look at the wiring and connections to the NTC thermistors.

There’s an NTC thermistor on the flow pipe (hot water leaving the boiler), and the return pipe (water that’s travelled around the heating system, and re-enters the boiler, ready to be heated once more).

All sections of wiring, connections and the NTC thermistors, need to be giving power. If any aren’t, they need to be fixed or replaced to solve the problem.

The fan on your boiler helps to vent dangerous gases, out via the flue. For that reason, your boiler won’t ignite until the PCB recognises that the fan is running.

To determine it’s running, there needs to be a solid connection between the PCB and fan (via the wiring harness), as well as the air pressure switch. The air pressure switch detects pressure changes in the boiler, so if this component isn’t connected, that’s going to lead the PCB to think that the fan isn’t operational (when potentially, it is).

So, this electrical fault-finding mission for your boiler repair company will involve the PCB, fan and air pressure switch. They’ll want to look for signs of loose connections, damaged wiring, as well as any signs of water damage.

Once they’ve located the issue with wiring and connections, they’ll need to replace or re-secure them. They’ll also want to check all three components for power, fitting replacements where necessary.

The next wiring issue your boiler engineer will need to work on, is the connection between the gas valve and the PCB. Once the boiler recognises the fan is working and therefore, venting harmful gases from the boiler, it will allow the gas valve to open, giving a steady supply of gas to the burner.

And, this is potentially dangerous. Your boiler repair company will need to isolate the issue, ensuring that the problem with the gas valve’s position, isn’t in fact, a faulty gas valve.

If the fault code being displayed on the display panel is a memory fault, that’s due to the PCB not being configured properly.

For new boilers, the owner’s and engineer’s manual should come with a specific product code, that enables to boiler to communicate with the PCB. It’s not been configured.

If you’ve had a PCB replacement, then it’s likely the PCB hasn’t been configured, using this same code. However, that’s incredibly unlikely. Your boiler engineer will have had to test your boiler before leaving, and they wouldn’t be able to do this without the PCB functioning correctly.

ne other scenario is a boiler chip card (BCC) error, which we’ve mentioned below.

The majority of boiler’s use a generic PCB unit. So, there are dozens of different boilers, using the same type of PCB.

The problem? A generic PCB won’t work with a boiler, without the correct boiler chip card, that’s in good condition and has been properly inserted.

It’s the boiler chip card that enables your unique boiler, and your generic PCB, to work in harmony.

If your boiler is showing a memory fault like the one mentioned above, a boiler chip card fault is a possibility.

Your boiler engineer will need to remove your boiler’s casing to gain access to the PCB, and the boiler chip card. First, they’ll check it’s correctly inserted. These are fragile components, so the slightest of boiler vibrations could displace them.

Next, they’ll need to check it’s not faulty. Assuming it’s not, they’ll want to check that the boiler chip card is the correct one for your boiler, fitting the correct replacement if necessary.

If you’ve been noticing a burning smell and have then noticed fault codes that relate to electronic failures (such as the PCB not working correctly), it’s likely there’s water damage in your boiler.

The most probable cause of the burning smell, is moisture dripping onto connections and burning them out. When that happens on important connections, it leads to faults, and that’s going to lead to intermittent boiler operation.

The problem with water damage, is that it’s not just a one off. If something is leaking, it doesn’t just suddenly fix itself. So, not only will you need to get your boiler engineer to come and fix the problem with the electrical wiring and connections on the PCB, they’ll need to isolate the leak, and fix that too.

If your boiler repair company has exhausted all the options, and there’s no power to the PCB or display panel, it’s likely the PCB has had its final day.

And sometimes, even when extensive repairs would result in a fix, it’s a more financially viable option, to simply replace the unit; it’s likely to outlast the boiler.

What can cause PCB problems?

It goes with out saying that old age, wears out components. So, if your boiler is particularly old, it’s likely many of the issues you’re experiencing are due to general wear and tear. However, there are two other things your boiler engineer needs to look out for.

Has your boiler been noisier than usual as of late? Naturally, a boiler is going to make noise, and that causes small vibrations.

But, if you’ve noticed that your boiler has been noisier than usual, there could be a bigger problem at hand.

Many boiler components (including the PCB), are extremely fragile. Excessive vibrations can cause things such as the boiler chip card and connections to the PCB to break loose, and even damage wiring.

Get your emergency boiler repair company to check any components that could be contributing to these vibrations, before fixing the PCB. The most obvious components to check, would be both the pump, and the fan.

And, another common killer of modern boilers, is water damage. Your boiler is full of electronic components, and water isn’t welcome.

Typically, the leaks on most boilers come from either the heat exchanger, or the pump.

The heat exchanger is prone to cracking, when there’s limescale build-up. That’s because limescale creates hot spots, and that weakens sections of the heat exchanger. Eventually, that crack turns into a leak, dripping on components, and causing damage.

And, if your pump is old, or put under excessive strain (it’s blocked with heating sludge, or on too high a speed setting), that’s going to result in blown seals. Like the heat exchanger, that means leaks and expensive electrical repair bills.

There are some preventative measures you can put in place to stop both. First, make sure your system is free of heating sludge. A hot flush will give you a relatively clean system (without the risk of further leaks that you’ll get with a power flush). Your system can then be dosed with inhibitor, fitted with a magnetic boiler filter, and a scale reducing filter.

How much will it cost to fit a new PCB in my boiler?

Unfortunately, the PCB is the most expensive component in your boiler. Typically, you should expect repair costs to be in the region of £400-500.

And, there’s a big differential in price, because the cost of the PCB for your boiler could be £100 less or more, than the PCB for another boiler.

Given that a boiler replacement could be as little as £1,800 and will last for years to come, it makes sense to get a professional assessment on the state of your boiler, before investing heavily in repairs.

Typically, we’d suggest getting your boiler repair company to assess the condition of the following expensive parts:

his assessment will give an indication of whether other expensive parts are likely to fail in the future. If they are, a new (and much more efficient) boiler with a long parts and labour warranty, is likely to be a more cost-effective solution, compared with a repair.

How long will it take to fix my boiler?

If you have a problem with your PCB, a repair can usually be done within one working day.

The time taken to replace a PCB is also around one working day. However, it’s worth noting that it’s unlikely your boiler repair company will have a spare PCB on their van. They’ll need to order it in from a local plumbing and heating merchant (usually, next day delivery).