4 Heat Exchanger Problems And How To Fix Them

Welcome to our boiler heat exchanger page regarding the faults problems and their cures where you have a question and we try our best to answer. If you require a service then please visit our emergency boiler repair page.

In this article, we’re going to cover the most common problems with boiler heat exchangers, what causes the issues, and what needs to be done to get your boiler working again.

When your boiler develops a problem, it’s going to display a fault code on the display panel. Depending on the type of boiler you own, this could be one of hundreds. It’s the job of the printed circuit board (PCB), to determine which is the most suitable fault code to display, based on the suspected problem.

Whilst the fault code on the display panel won’t help you fix the problem, it will help your Gas Safe engineer.

Fault-finding on boilers is complicated, and most of the time, long-winded. The fault code being displayed helps your boiler repair engineer to determine the most obvious causes of a fault. This makes the process much quicker than checking every single component on your boiler. As this helps to save the time taken to fix your boiler, it also reduces the cost of the repair. 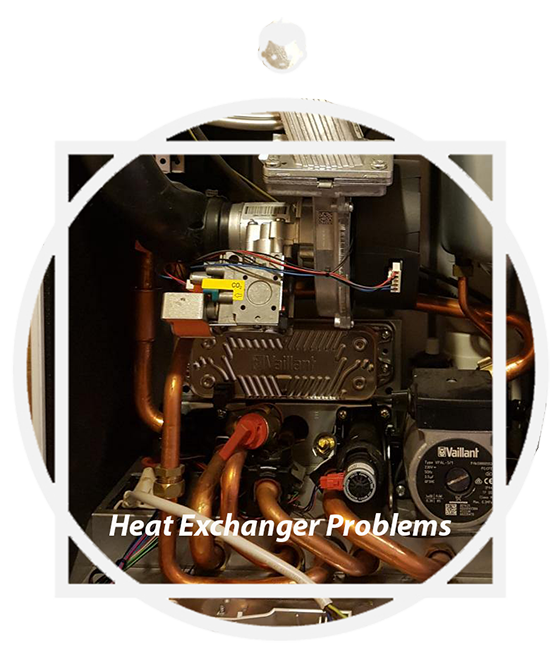 Just below is a typical list of questions which we do our best to answer further in the article.

Can I fix my heat exchanger on a DIY basis

Any work on a gas appliance needs to be conducted by a Gas Safe engineer. You shouldn’t try and work on your boiler, unless you have Gas Safe accreditation.

A lot of people try to reset their boiler thinking that this is going to fix the problem. But, a reset on a boiler is specifically designed to be used when the problem has been found and fixed. It’s a way to clear the printed circuit board of fault codes that are no longer relevant, rather than a solution to fix the problem.

A reset could temporarily trick your boiler into thinking that a problem has been fixed, even when it hasn’t. Depending on the exact problem with your heat exchanger, this could lead to further expensive repair bills. The lock out function and fault code being displayed, is a way to protect your boiler’s internal components from getting damaged any further, saving you money in the process.

And, for faults that are potentially dangerous, the lock out function will help to isolate the boiler from being dangerous. Resetting the boiler might get the appliance working for a few minutes, but it could be dangerous during this few minutes of operation.

Leave fixing and resetting your boiler, to your boiler repair company.

How does the heat exchanger on my boiler work

After leaving via the flow, eventually it returns via the return pipe, ready to pass through the heat exchanger again, to get back up to temperature. As the water travels through the heating system, it’s going to lose temperature. This heat is absorbed by towel rails, radiators and pipework.

Using a range of sensors, the boiler can determine what heat is required, as well as what the temperature of water is that’s passing through the flow and return pipes. If it drops too much, the PCB will increase the supply of fuel to the burner, increasing the temperature of the heat exchanger, and vice-versa.

It’s a known fact that older boilers tend to be much noisier than newer boilers. Any noises or vibrations are a loss of efficiency, and newer boilers are much more efficient than older ones.

However, regardless of age, one thing you shouldn’t hear is a whistling noise. If you can hear whistling, there’s a good chance that the heat exchanger is to blame.

Combined with whistling noises, you might find that your boiler is cycling on and off. Basically, it’s getting up to temperature far to quickly, so turns off, cools down, and starts the process again.

Typically, we find that the problem here, is most likely due to a build-up of limescale. Just as limescale can build-up in washing machines and dishwashers, it can build-up in boilers too. And, that’s because it’s not specific to an appliance, but instead, to the water that it’s being supplied with.

There are various hard water maps available online. That’s going to give you an indication of the level of limescale in the water in your local area. Areas with moderate-high limescale are the most likely to get problems with limescale build-up in boilers.

As the water burns hotter and hotter, it starts to bubble and release air. This is known as kettling, and it’s the most likely cause of your boiler making whistling noises.

On some occasions, the heat exchanger can be repaired. Limescale needs to be removed completely, for the kettling to stop. If it’s not removed in full, the problem will persist. Eventually, this is going to lead to the heat exchanger plate cracking.

Once the problem has been isolated and fixed, there are preventative measures you can put in place to stop this happening again. The first thing to do, would be to flush out the system using a limescale cleaner. And, as a long-term preventative measure, ask your boiler engineer to fit a limescale reducing filter such as a BoilerMag or Scalemaster.

If you do a quick visual inspection of the exterior of your boiler, it should be obvious if there are any leaks. First, you’ll want to check for pooling underneath your boiler.

If there are not obvious signs of water dripping from your boiler, keep an eye on the pressure gauge. The pressure in your system is determined by the amount of water it contains. Typically, we’d expect your boiler’s pressure to be set at around 1.3 bar. Anything below 0.5 bar, and the boiler will lock out and display a fault code that relates to a “dry fire”, “circulation fault”, or “lack of system pressure/water”.

Whereby the pressure gauge on your boiler continuously drops, that’s a sure sign of a leak. Although there’s a chance of it being on towel rails, radiators and pipework, it’s likely your Gas Safe engineer will quickly inspect the inside of your boiler first.

But, that’s not the only problem. There’s a good chance that this leak has led to electrical components, wiring and components being damaged. So, your Gas Safe boiler repair company will need to check all electrical aspects of your boiler. If nothing comes of a visual inspection, they’ll need to double check that there aren’t any major issues, by using a multi-meter to test wires and connections.

If there are signs of damage to anything electrical, these items will need to be fixed alongside the heat exchanger. If they’re not, there’s a good chance that when the boiler is reset, it locks out again and displays a fault code relating to an electrical issue.

Boilers can make all kinds of noises, and tapping sounds are one of them. If you can hear light tapping sounds, there’s a chance that this is due to central heating sludge.

This is different to limescale; it’s a combination of rust from the inside of radiators and pipework, as well as minerals in water.

Although heating sludge tends to end up as dirty water, when rust first breaks off, the pieces can be large enough to make noises as they pass through pipes, the heating pump, and even the heat exchanger.

It’s not just noise that’s the issue here. Central heating sludge can slowly block up all parts of your heating system. That includes the likes of the pump, radiators and the heat exchanger.

Your engineer will be able to hot flush the system, to remove most of the heating sludge. A power flush is a more powerful alternative, but it isn’t advised. It’s only usually newer heating systems that are strong enough to take the force of a power flush (without new leaks occurring), and it’s rare they’re dirty enough to need one.

Once the system has been cleaned in full, it will need to be topped up. As your heating engineer does this, they’ll add central heating inhibitor to the system. It’s this inhibitor that breaks down all the small pieces of rust that break off in the heating system over time.

But, it’s pointless adding central heating inhibitor to break down sludge particles, without having a way to catch them. To catch them, you’ll need a heating filter from a top brand like Fernox, Magnaclean, or Boilermag.

These filters have a small body, and the sludge they catch can be removed with each boiler service.

Before your boiler engineer decides on what is the problem with your boiler, they need to check the PCB, especially if multiple fault codes are being displayed.

The PCB controls all electrical components in your boiler. It’s also the component that decides which fault code should be displayed and when.

So, before jumping to conclusions, your boiler engineer will need to test the PCB. They’ll be able to do this using a multi-meter.

I need a new heat exchanger; how much is it going to cost to replace

If your boiler repair company is suggesting that your heat exchanger is beyond repair, or that a repair isn’t going to be the most economical option, a replacement is going to be needed.

The exact cost of a repair is going to vary depending on where you live (and the labour rates in that area), as well as the cost of the heat exchanger for your boiler (different boiler heat exchangers, vary in price).

As a guideline, you should expect to pay somewhere in the region of £450-500 for a replacement heat exchanger for your boiler.

Should I just replace my boiler, rather than fitting a new heat exchanger

Boiler repairs are rarely cheap. And, besides the PCB, the heat exchanger is one of the most expensive parts to replace. So, it’s worth getting your boiler engineer to assess the condition of your boiler, especially if it’s out of warranty.

A new combi boiler for a small property could be as little as £1,800. So, it makes no sense to spend £500 or more on repairs, for an inefficient boiler, that is already showing signs that it might fail again soon.

To help decide whether you should go for a replacement, or simply repair your current boiler, ask your engineer to check the:

These are some of the most expensive parts to replace. So, if these parts look like they’re in poor condition and will fail soon, the most economical option would be a replacement boiler.