The Vokera fault code A11 lock out problem Q & A or require an engineer for an emergency boiler repair.

Just below, we have a list of common questions relating to the A11 fault code on the Vokera boiler. 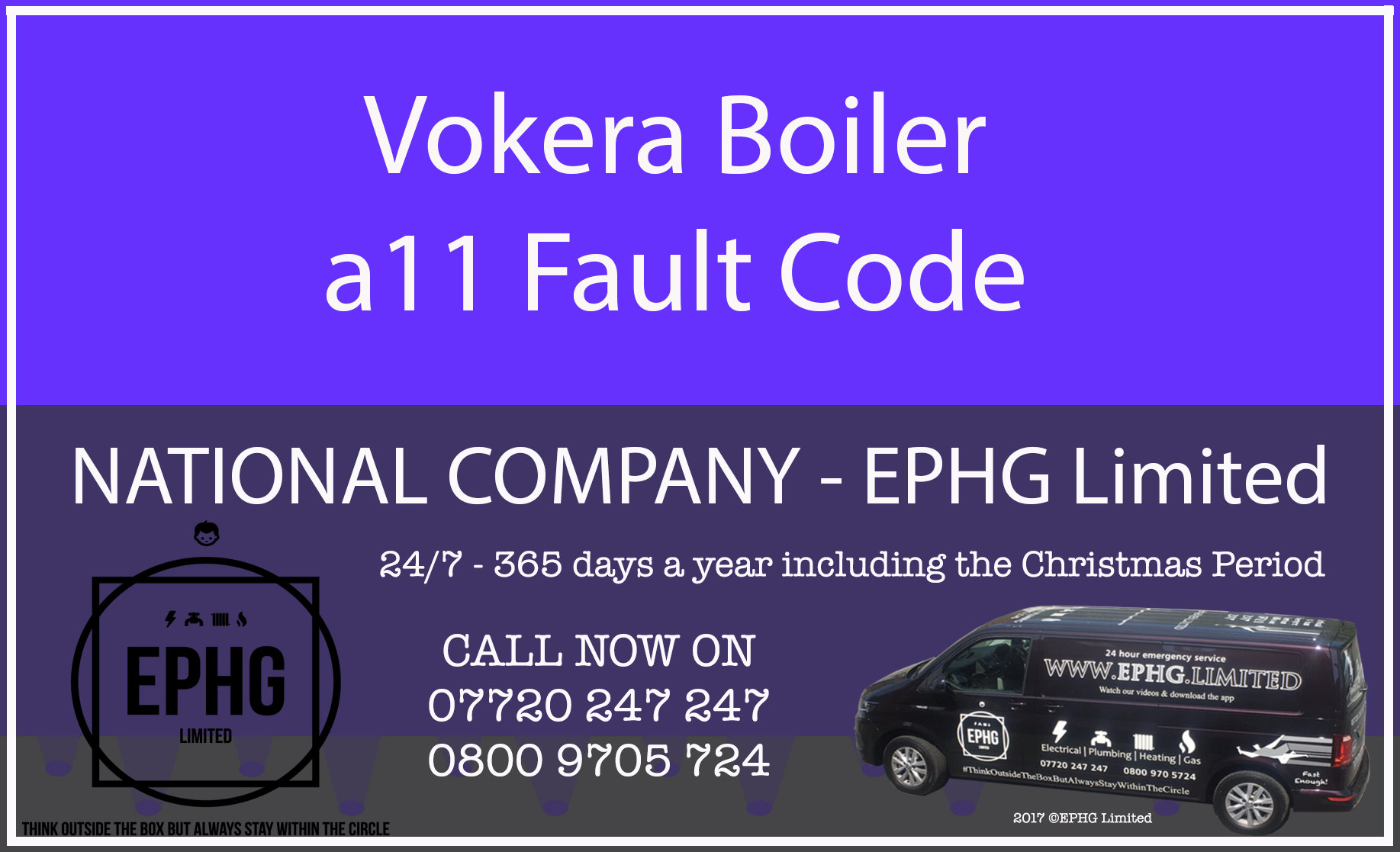 What does the Vokera boiler A11 fault code mean

All modern boilers have a series of fault codes. These codes are designed to help an engineer to diagnose and fix the problem.

Usually, the boiler will lock out (stop working). So, if you’re seeing the A11 fault code and you’ve had a boiler lock out, these two things are connected rather than being two separate issues.

In this case, the boiler has noticed a false flame.

This could be due to:

If my boiler is showing the A11 fault code, is it likely to be dangerous

When the A11 fault code is displayed, the boiler should lock out.

You shouldn’t reset your boiler. This lockout is designed to make the boiler safe. It should only be reset when the boiler engineer has found and fixed the problem.

In its locked-out state, the boiler isn’t dangerous. However, operating with the A11 fault (i.e. trying to get it to work by constantly resetting it) could mean that the boiler is dangerous.

You need to phone a Gas Safe engineer and leave them to fix the problem.

It’s rare that the A11 fault code on Vokera boilers results in a boiler replacement. Typically, we find it’s a small electronic issue that leads to the boiler working intermittently.

However, this isn’t always the case. Parts such as the gas valve and printed circuit board (PCB) are incredibly expensive to replace.

On older boilers, it’s rare that investing substantial amounts of cash in repairs is a worthwhile investment.

That’s why it’s important to have a Gas Safe engineer diagnose the problem.

Many people try and diagnose their boiler on a DIY basis (which isn’t safe). This regularly leads to the wrong parts being diagnosed, as well as faulty and expensive repairs not actually fixing the problem.

How does moisture find its way onto electronic components

Boilers and your whole heating system are full of water. This is what keeps the pressure in the system up.

However, there are parts in your boiler that are prone to breaking. When they break, they can leak slightly. It’s these leaks that can cause moisture to settle on electronic components.

If you have noticed pressure dropping on your boiler, there’s a good chance that’s due to a leak in the boiler.

In a worst-case scenario, the water that’s leaking drips directly onto these components and ruins them completely.

Diagnosing a leaking boiler as being the route of the problem isn’t particularly difficult.

The heat exchanger and the boiler’s pump are both prone to leaking. A quick visual inspection will show the engineer where the leak is coming from.

However, the difficulty is then highlighting all the components this water has found it’s way onto.

When water damage is an issue, it’s rare that there’s just one part at fault, even when that is what the fault code suggests.

Why would my boiler leak in the first place

The heat exchanger will usually start to leak when it cracks. This would be due to limescale build-up in the heating system. If you’re in a hard water area, this is the likely culprit.

The pump on the other hand, will usually leak when the seals blow. The seals are what keep the water in the pump.

Generally, these leaks occur because of old age and sludge build-up (like the limescale mentioned above). However, there are catalysts to the problem.

One thing we see often are boilers that have been over-pressurised.

Most boiler pressure gauges will be “in the red” below 1 bar and above 3 bar. That’s a suggestion that anything between 1-3 bar is acceptable. But, that’s not actually the case.

Anything above this is putting excess pressure and therefore strain, on parts such as the heat exchanger and pump we’ve mentioned above.

So, if you’ve noticed pools of water below your boiler and its currently above 1.3 bar, there’s a good chance that this has been a catalyst to the leak.

The quicker this excess pressure is released the better. By releasing a small amount of pressure, the leak will slow down.

If you know where the drain cock is in your property, you can release water pressure via that. All you’ll need to do is attach a hose and route that hose outside for the water to drain.

Once the pressure is down at around 1.3 bar, you can shut off the drain cock and remove the hose.

If you don’t know where the drain cock is, you should be able to remove enough pressure from the radiator bleed valves.

These are located on the top and side of your radiators. You’ll need to cover your walls and floors with towels (to catch dirty water) and have a container handy to catch water coming out of the valve.

Like the drain cock, you’ll open the radiator valve to release pressure (and water). If you hear a hissing noise to start with, don’t worry, this is just air escaping from the heating system.

Once you’ve released enough water that the system pressure is at 1.3 bar, you’ll be able to close the valve.

Gas to your property comes via a meter, a regulator on the meter and copper pipe work – that gets it to the boiler.

Gas valves tend to last for years. However, they’re known for getting stuck. They can get stuck open or closed and this is going to lead to a boiler lockout.

In this case, it’s likely that the gas valve isn’t fully operational. It’s being told to close by the PCB but isn’t closing fully.

This is letting tiny amounts of gas into the burner and so a flame continues to burn.

Can a stuck gas valve be fixed

On many occasions, a gas valve that is only partially closing can be freed.

Your boiler engineer needs to be sure that it’s fully operational before re-installing it and resetting the boiler, as a gas valve that is constantly letting-by can be dangerous.

If the gas valve can’t be fixed, will I need a new boiler

If it’s the gas valve causing the A11 fault and it can’t be repaired, the valve can be replaced.

The price of the gas valve will depend on the Vokera boiler model you have. However, a reasonable estimate is to expect to pay £275-£300 for a replacement.

Because of this large cost, it’s worth getting your boiler engineer to inspect the potential reliability of other components.

If many other expensive components such as the PCB, heat exchanger and pump are showing signs of excessive wear, it might be worth considering a replacement boiler.

When there’s ever a boiler fault that relates to electronic components, the boiler’s PCB is always a potential culprit.

This is because it’s the PCB that controls all other electronic components in the boiler.

For instance, it gives and receives signals from flame sensors. If a flame is/isn’t being detected when it should, the PCB could be to blame, but so could the flame sensor.

It gives and receives signals to the pump. But, it might not be telling the pump to run when it should.

Essentially, many faults that look like they’re directly related to an electronic component (gas valve, pump etc) could instead be a fault with the PCB unit.

My boiler engineer has diagnosed the PCB as being the issue, should I replace it

As we mentioned with a gas valve replacement, it’s important to check all other parts first.

The PCB is the most expensive part in your boiler to replace. You should expect to pay in the region of £450-500.

In the case of water damage, it’s unlikely that the only component affected is the PCB. So, when repair bills aren’t limited to the PCB, a replacement boiler is a much more cost-effective long-term solution.