The Potterton fault code E15 lock out Q & A or require an engineer for an emergency boiler repair.

Just below, we have a list of common questions relating to the E15 fault code on the Potterton boiler. 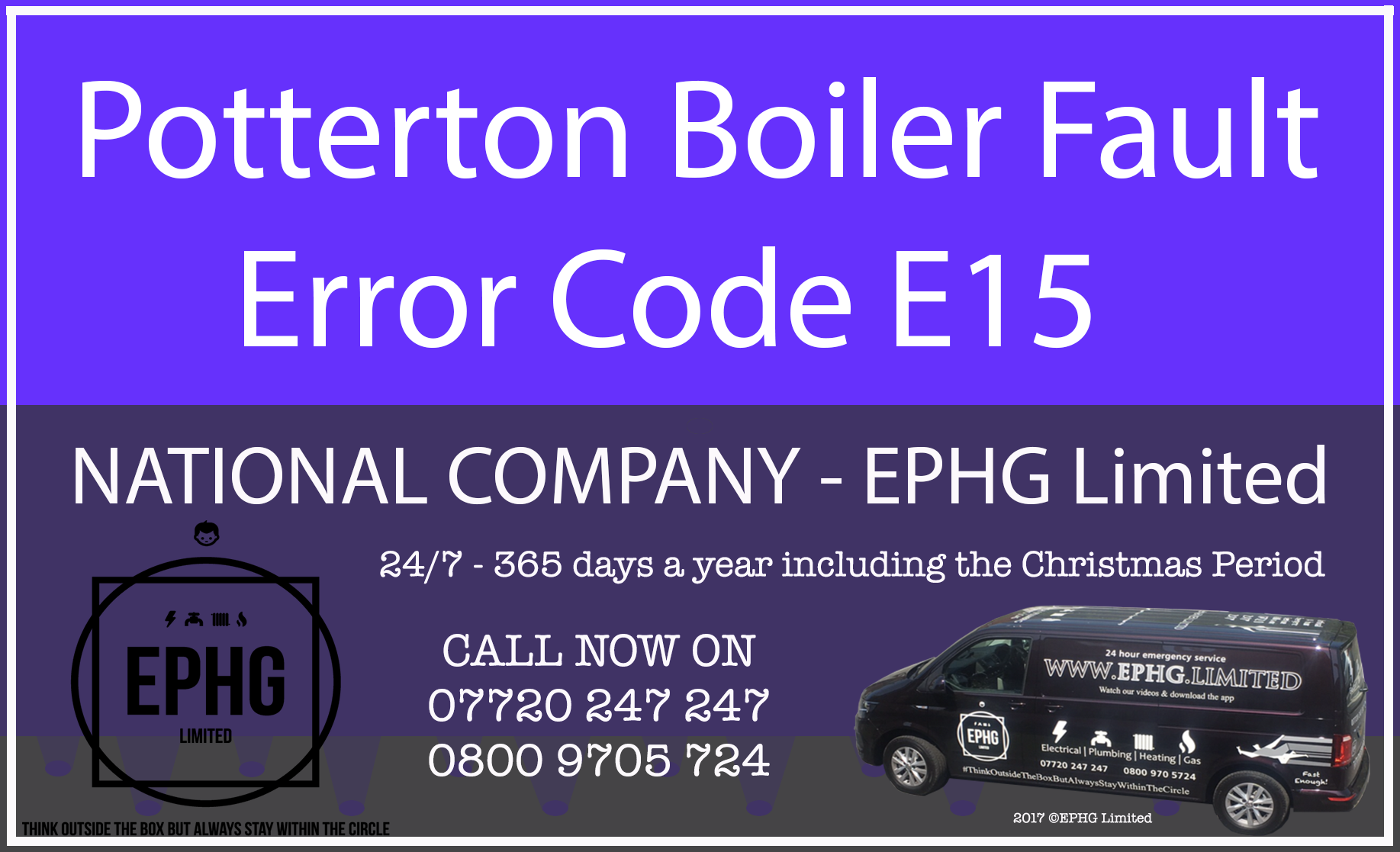 What does the E15 fault code mean on my Potterton boiler

Each Potterton boiler has a fault code built into the appliance. When the boiler recognises any issue, it will display a fault code. For important faults, alongside the fault code the boiler will lock out.

If a boiler locks out, it’s because continued operation would be harmful. It’s either going to harm people in the property (leaking gas, for instance), or internal boiler parts (for example, the heat exchanger).

The E15 fault code on Potterton boilers relates to an issue with the gas valve. Typically, we find that this is a command fault.

If I reset my Potterton boiler, will this fix the problem

Resetting a boiler should be done after the problem is fixed, rather than a way of trying to fix your boiler. So, you shouldn’t be resetting your boiler.

In this instance, the problem relates to gas in one way, or another. And gas can be extremely dangerous. Instead of resetting your boiler, the safer option is to call a qualified Gas Safe boiler engineer.

They’ll be able to conduct checks to determine what the exact problem is. Once they’ve isolated and fixed the problem, they will reset the boiler on your behalf, which should clear the E15 fault code.

Is a Potterton boiler showing the E15 fault code, likely to be dangerous

It’s hard to say whether the boiler is dangerous, without checking to see the exact fault. However, this issue does relate to the gas valve, and therefore could be dangerous. If in doubt, switch off the appliance and call an engineer.

What does the gas valve on my Potterton boiler do

Each gas boiler is fitted with a gas valve. This valve helps to control the flow of gas into the burner. So, if you demand hot water and heating isn’t currently up to temperature, the gas valve is going to open to allow more gas into the burner, to heat up water quickly.

On the flip side, when you turn off your thermostat or hot water, the gas valve will need to close the flow of gas to the burner, as it’s no longer required.

The valve knows when to open and close and is given the commands to do so by the boiler’s printed circuit board. It’s the PCB on a boiler that controls all important electronic parts. It also monitors a range of sensors that feed back readings, so it knows when to lock out a boiler, in case of danger.

As this is a gas valve command fault, the most likely culprits for the problem are:

To determine what the exact problem is, you should call an emergency boiler engineer. They’ll be able to isolate each part and test them to see which one is causing the issues with your boiler.

This depends on the exact problem, and the overall condition of the rest of your boiler. For instance, if you need a PCB and gas valve replacement and your boiler is showing excessive signs of wear on other boiler components, it makes much more sense to replace the boiler rather than spending lots of money fixing it.

So first, you need to determine what the exact problem is.

What faults can occur with the gas valve

The most common faults with gas valves on Potterton boilers include:

The first thing your boiler engineer is going to check is that the gas valve is getting power. They’ll be able to test this using a multi-meter. If the multi-meter shows all wiring and connections as being operational, but no power to the gas valve, it’s likely the unit has failed completely.

On some occasions, the valve might gain power spontaneously. That’s going to lead to intermittent boiler operation. This will include things like the boiler being supplied gas even when there’s no demand, and this is potentially dangerous.

If the gas valve is faulty, a replacement is going to be needed.

Is a replacement gas valve on a Potterton boiler expensive

The cost of a new gas valve in your Potterton boiler will depend on the exact model you own, and the availability of parts. As a typical guestimate, you should expect to be paying somewhere in the region of £250-300. That’s going to cover the cost of both parts and labour.

The gas valve needs to receive signals from the PCB to know when to open and close. It also needs to give signals to the PCB to tell it when it’s operating; this is how the PCB knows if there’s a fault.

If connections and/or wiring become loose or damaged, the integrity of these signals is going to compromised. Signals become intermittent to a point where the PCB doesn’t know whether the gas valve is responding to the demand for gas, or when the valve is told to close. As a safety precaution, your boiler will lock out.

Can loose and damaged connections be fixed, or will the valve need to be replaced

Your emergency boiler engineer will be able to test the connections and wiring to/from your gas valve, just like they can with the gas valve itself. Like the gas valve, they’ll test wires and connections using a multi-meter. This shows up any faulty parts of a circuit, which can then be fixed.

So, it’s unlikely you’ll need to replace the whole gas valve in this scenario.

Not all fault codes are perfect. Although the E15 relates to a command fault (most likely electrical), the problem could be mechanical. A worn gas valve can stick open or closed.

When it sticks open slightly, gas is letting by into the burner when it shouldn’t be. This creates a false flame that is potentially dangerous, so the boiler locks out.

On the flip side, if the gas valve is getting stuck closed, it won’t be able to open to supply enough gas to the burner. That’s going to mean that when you demand for hot water or heating, the boiler isn’t responding.

Generally, a sticking gas valve can be freed. That’s going to mean that you don’t have to spend £250-300 on a replacement. However, anything relating to the flow of gas can cause extreme danger. So, if your boiler engineer isn’t happy that the valve is 100% free, or the sticking has caused excessive wear, it’s likely they’ll suggest replacing the valve; and we’d be inclined to agree with them.

My Gas Safe engineer thinks the problem lies with the PCB, does this sound right

The problem with any fault code, or any command (electrical) fault, is that it comes from the PCB. The PCB controls all electronic components. So, if the PCB isn’t working correctly, these components won’t work correctly either.

And to make matters worse, the PCB controls all the fault codes on the boiler. So, when it shows a code after a fault, the code could be irrelevant to the fault at hand (the PCB).

It makes sense that in the case of the E15 fault code being displayed, the PCB could be the culprit. A command fault means that there’s a problem with the communication between the PCB and gas valve.

To rule out the PCB as the culprit, your engineer can test the PCB for power. This is going to help them determine if the PCB can give and receive signals to the PCB. They’ll also need to check the boiler chip card is inserted correctly, and that all wiring and connections are secured, and free from damage.

If they find that the PCB is the problem, it’s going to need to be replaced.

If my boiler needs a new PCB, how much is it going to cost

The PCB is one of the most expensive parts to replace in a Potterton boiler. You should expect to pay somewhere in the region of £450-500 including parts and labour. For old and tired boilers, it’s sometimes better to consider a replacement, rather than this expensive repair.