The Potterton fault code E134 no gas going through gas valve Q & A or require an engineer for an emergency boiler repair.

Just below, we have a list of common questions relating to the E134 fault code on the Potterton boiler. 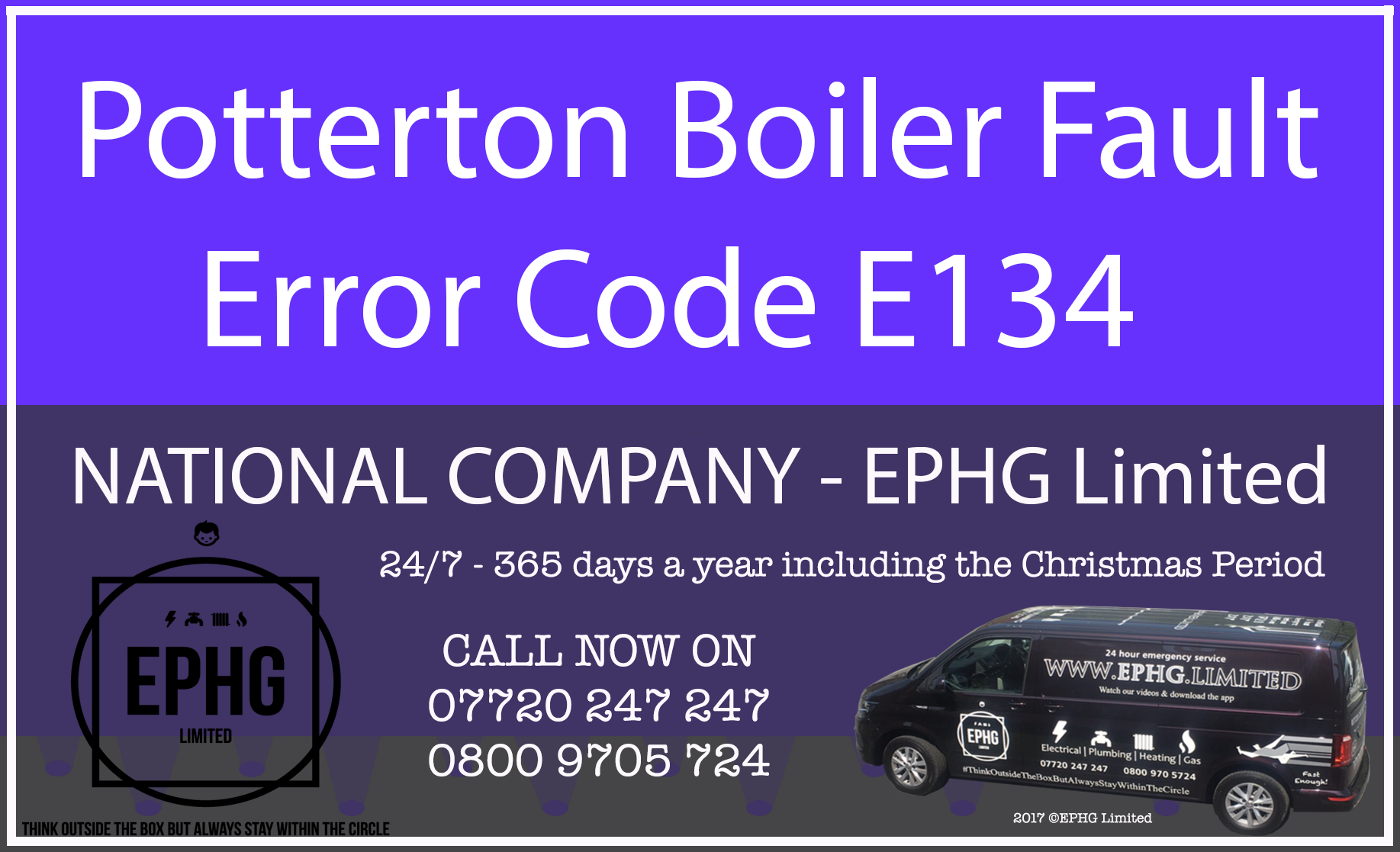 What does the E134 fault code mean on my Potterton boiler

Your boiler’s heart is the printed circuit board (PCB). When the PCB notices an issue, it will lock out and display a fault code. In this case, the E134 fault code means that the gas valve has been told to open, but there’s no gas flow detected.

Is a boiler showing the E134 fault code dangerous

Any gas related fault is a potentially dangerous one. This isn’t a problem that should be fixed on a DIY basis, as a wrong move could make the boiler even more dangerous than it already is.

Instead of a DIY repair, you should call a Gas Safe engineer to find and fix the problem.

Your boiler engineer will reset your boiler on your behalf, once they’ve found and fixed the problem causing the fault.

This isn’t a hyper-specific fault code. Therefore, the fix isn’t a simple one to find. The problem could be with the:

Your boiler engineer will be able to test the gas pressure into the meter, out of the meter and into your boiler. If there’s a problem with gas pressure and supply at any of these points, these tests will help to highlight exactly where that supply fault is.

For instance, they might find that the gas main feeding your boiler is insufficient. This is common when a new and larger boiler is fitted to a property, as older gas regulations were more lenient. Due to the larger boiler needing more gas than the previous appliance, the supply isn’t sufficient.

But, in winter, it’s likely that the gas meter is to blame. Meters that are located outside and exposed to the elements have problems with the regulator freezing. If this is the case, it needs to be boxed in and lagged, to protect it from the elements.

Gas travels from the mains, to the meter, through the regulator and to your boiler. The flow is constant, and it’s the gas valve’s job to ensure that the boiler’s burner is constantly receiving the amount of gas it requires. When this part fails, you’ll have problems establishing a flame, stabilising a flame, and heating hot water/radiators.

Your boiler engineer will be able to test the gas valve using electrical testing equipment such as a multi-meter. If the gas valve isn’t showing power, they can check wiring and connections to and from the component. If these connections and wires show power, the problem is with the valve, and it will need to be replaced.

Although prices will vary depending on the exact model of Potterton boiler you own, you should expect to pay around £300.

And, whilst the job will only take a day, don’t expect it to be completed on the same day you call a boiler repair company. Gas valves are spares that most gas engineers won’t keep on their vans. So, they’ll have to order it in from their local plumbing merchants (usually next day).

Not all problems relating to the E134 fault code are down to faulty components. Sometimes, it’s just a case of simple adjustments.

After testing the gas valve for power, your boiler engineer will be able to check the adjustment on a valve. If the adjustment is even a tiny bit away from where it should be, that’s going to affect the gas supply to the burner.

If the valve can be adjusted to supply the burner with sufficient gas, it won’t need to be replaced.

Why would my gas valve be sticking closed

Gas valves in boilers are moving parts. And like all moving parts, they wear out, fail and sometimes even get stuck.

If the gas valve isn’t excessively worn, your boiler repair engineer will be able to free the valve. But, if there’s even the slightest sign that this might happen again, they’ll suggest a replacement. An intermittent gas valve can pose a danger.

The E134 fault code is one where the PCB thinks the gas valve is open. Mentioned above, we covered valves sticking closed. If the PCB was faulty, it could think the valve was open, even if it’s stuck closed.

And likewise, if the PCB is faulty, it might not be giving the correct signals to the gas valve. This is going to create intermittent boiler operation, and the PCB to think that the gas valve isn’t responding when it should be.

Typically, repair costs of £500+ are when we should start thinking about the possibility of a new boiler. A PCB replacement could cost £500, and a gas valve around £300. If your boiler’s overall condition (pump, fan, ignition leads etc) is good, it may still be worth repairing it, rather than replacing.

However, get your engineer to check all expensive and important components; they’ll help you to determine the most cost-effective solution.