This article was inspired by a reviewer under the username JamesL-2783 on the Yell website when the reviewer decided to post an unverified review with not enough evidence of the claim being made.


Reviewer Requests Money Back In Exchange Of Taking Review Down

The reviewer in question had written a review about EPHG but more shockingly without making an official complaint asking for a full refund in return of taking the review down.

Consideration to take when writing a review

The reviewer agreed with EPHG of the terms section 15 clause 15.1 that any negative feedback on media against EPHG that the client will let EPHG know for verification reasons first before writing the review and (clause 15.2) if the review is regarding the contractor of which is to become part of media, clause 15.1 will be followed. This did not happen.

A reviewers rights to write a review

We understand that a reviewer has their rights to write a review but in doing so without following the agreement, they run the risk that in writing anything that is untrue and damaging to the company, the claimant could be at risk as to a claim or counterclaim.

Complaints Procedures To Consider Before Writing A Review

When JamesL-2783 had first written the review, the review was inaccurate, untrue and misleading.

A Reviewers Claim Which The Review Does Not Hold

The reviewer claimed to the public that he was told that there was a £69 call out fee but they omitted to say that this didn’t include VAT. We believe that the reviewer either misheard the rates or there was intentions to damage the reputation of EPHG, a claim that the review had no evidence of.

Price Plan In Regards To Writing A Review

Within the terms of EPHG being the price plan at https://ephg.limited/price-plan.html shows the rates are given that clearly explain the rates and a mention of an additional fee for the allowance of VAT.

After seeing the web compliance terms via the advertisement, the reviewer had contacted EPHG and the rates were explained with the mention of the VAT as this is what the staff are fully trained to do and to save any accusations, a text is sent immediately after the booking to what has been paid being the total amount including VAT. The reviewer in question was sent a delivered text within 3 minutes of making a payment, so any discrepancies in the VAT could be answer if the client showed concern. The only concern from the review EPHG had was did the reviewer hear the mention of VAT.

What is a public media review system there for?

The review system is there for public interest which is also there to try and make companies work better so the public get a better service. One question I ask myself, however, can this review make us run a better service and the answer isn’t simple enough to be able to implement on the system because you would have to ask each caller to read a document, sign the document when in need of an emergency service requiring urgent repairs and maintenance. This would then likely cause the person to look else where because the experience of the reviewer could be so much more stressful, so we go with the more-simple approach and that is to send a text receipt immediately after booking with a link to the appropriate content for any of our clients to read well waiting for the contractor to turn up.

Cancelling Upon Receiving A Receipt That I Didn't Understand The Costs

If a person receiving a receipt decided to cancel immediately by reply of text to say don’t except the cost because they didn’t hear the amount correctly or feel that they’ve miss sold the service, within reason, the amount could be voided if court in time or refunded in goodwill. 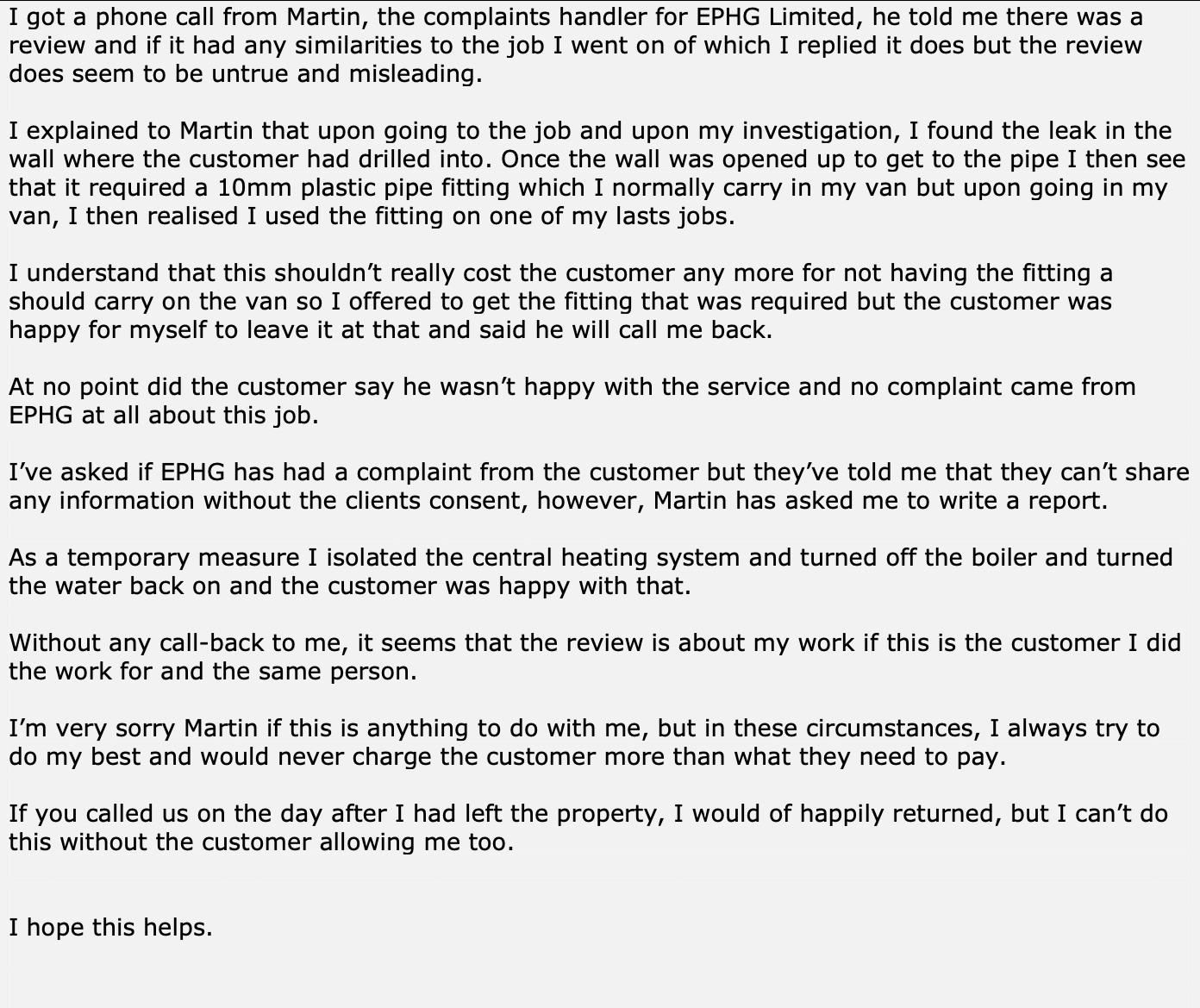 The reviewer who had received his text didn’t question the full amount of the call-out fee and seemed happy for the contractor to continue in arriving at his property.

Report From The Contractor

As reported by the contractor in the image to the right, he had spent time getting to the problem and upon needing a part, the contractor then realised a fitting that was required couldn’t be found and offered to return with the Part but the reviewer denied the contractor coming back.

The reviewer claimed that all the contractor did was turn the boiler off which seemed somewhat different to the report by the contractor.

When the review was first posted, the response to the review showing to the left shows how we acted immediately on realising an unwanted review was posted.

On the 15th, the review was changed and updated to reflect that further communication was made but on realising the review had been was hidden and updated on the 6th November 2020, a further update was required to the response as the review from the reviewer was updated.

After the original review was posted by the reviewer and communication was made, the process of the complaint had begone by email between the reviewer and EPHG which can’t be disclosed for privacy reasons.

First Objective To A Complaint

The first objective to a complaint is always to say we’re sorry if any wrong has been done and we would require the consent/permission of the complaint to be shared or forwarded to the contractor in question for questioning.

No consent/permission was granted and therefore EPHG were not able to investigate the contractor apart from being able to answer for themselves.

Questions Asked As Part Of The Complaint

There were many questions asked and the relevant information was kindly passed over with a possible refund being offered either by entitlement, goodwill or not at all but what I was never going to agree on was just a refund in exchange of a review coming down because that is wrong.

If making a complaint and we don’t have the information available in the terms or unaware of legislation, EPHG do try to assist by looking for the information online if this becomes a part of a complaint. I MUST admit that a wrong link was provided but it was claimed that as it was outside my Scope I couldn’t answer the question.

In-regards to the reviewer, the question I didn’t know was relating to a scheme which was completely un-relevant to the complaint in question and therefore I didn’t feel I had to answer it.

In-regards to the reviewer saying in the review that we threatened legal action. If legal action means taking a person to court, using a solicitor or starting a law suit up is all part of taking legal action then non of this happened.

If a complaint is made and we feel that the complaint could be unlawful, we would point out the legislation and in any complaint this would be reasonable.