The Baxi fault code 111 maximum flow temperature Q & A or require an engineer for an emergency boiler repair.

Just below, we have a list of common questions relating to the 111 fault code on the Baxi boiler. 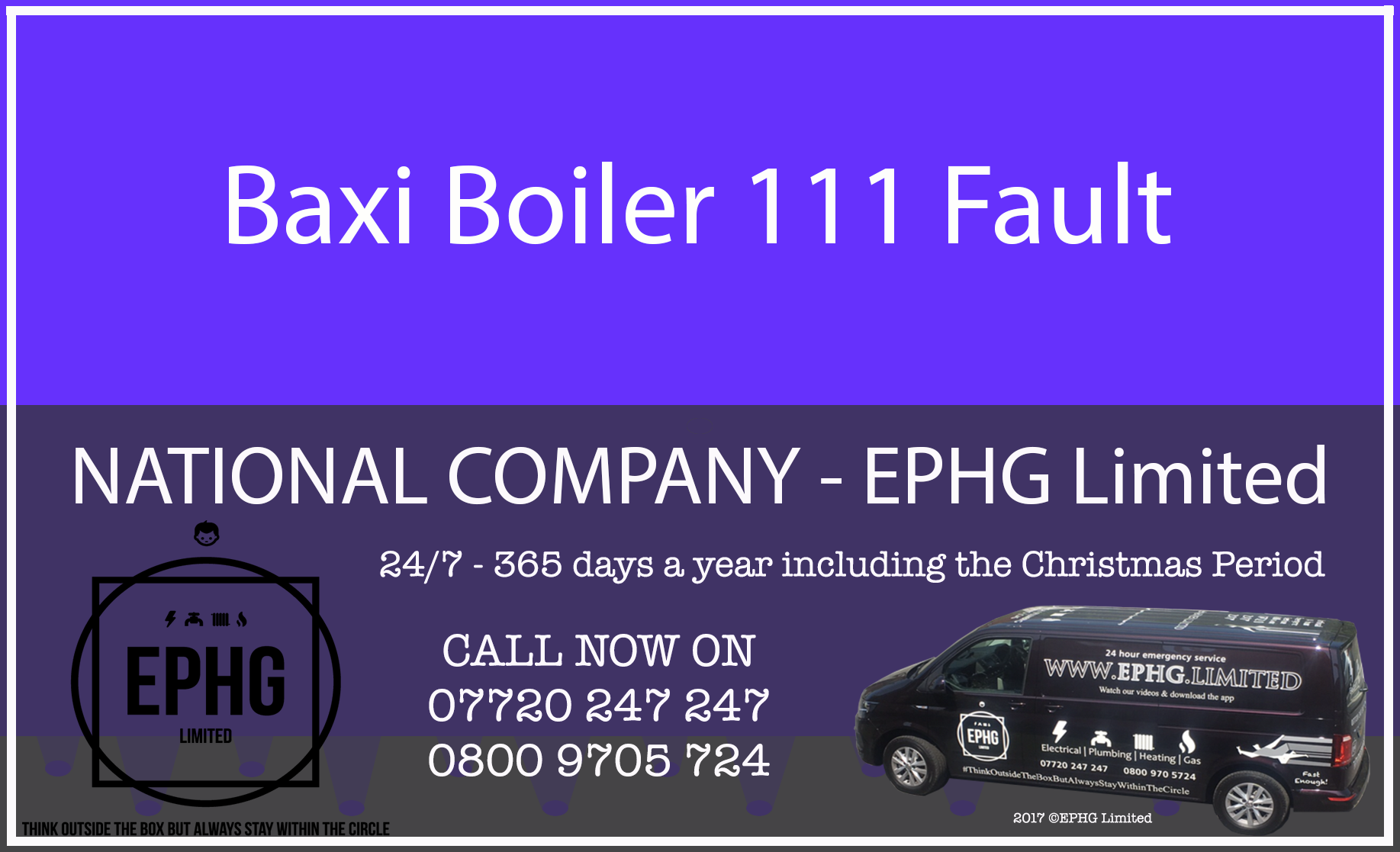 What does the 111 fault code mean on my Baxi boiler

The 111 fault code on Baxi boilers relates to a flow temperature that has reached its maximum.

All modern boilers have a fault code system. When a boiler recognises a fault, it displays a fault code. This is so a boiler engineer can highlight what the exact problem, otherwise fault finding would take a lot longer than it should.

Once a fault code has been highlighted on the display panel, there’s a good chance that the boiler will lock out. This lock out will stop the boiler working until the fault is fixed, and the boiler is reset.

Will resetting my Baxi boiler fix the 111 fault code

The lock out procedure that a boiler goes through isn’t a fault; boilers are designed to do this.

If the printed circuit board (PCB) gets signals from sensors that could lead to the boiler being dangerous, or continued operation could damage other boiler parts, it locks out. Essentially, it’s protecting you and all internal boiler parts.

By resetting your boiler, you’re putting not just internal parts at risk (which could lead to more expensive repair bills), but all the people in your property too.

So, don’t try and fix this on a DIY basis with a reset. Instead, employ a qualified professional (an emergency Gas Safe engineer) to find the fault, fix it for you, and they’ll reset the boiler on your behalf.

There are a handful of faults that lead to a boiler needing to be replaced. In general, the 111 fault code on Baxi boilers isn’t one of them.

What is the flow on my boiler

The flow on your boiler, is hot water that is leaving the appliance, after being heated by the heat exchanger. Once it’s up to temperature, water is pumped out of the boiler via the flow pipe. It then travels around the heating system and eventually returns to the boiler via the return pipe.

Naturally, a boiler’s return temperature is going to be lower than the flow. That’s because towel rails, radiators and even pipework, absorb the heat in the water, before it makes its way back to the boiler via the return.

When the flow temperature gets too high on a boiler it can cause parts to break. This is mainly since the increased temperature leads to increased pressure in the system. This can expose weak spots in the heat exchanger (causing cracks) and even cause the pump’s seals to blow, creating a long-term boiler leak.

So, the main job of the lock out in the case of the Baxi 111 error code, is to ensure that the boiler doesn’t receive any further damage by components working above the temperature that they should be.

What are the most obvious causes of a high flow temperature

The most obvious causes of this fault code include:

What is limescale, and why would it build-up near the flow pipe

There are two big killers of heating systems; limescale and central heating sludge.

Central heating sludge is something that all heating systems suffer with. It’s a build-up of minerals in water, but also rust from the inside of pipework, towel rails, radiators and valves. This sloshes around the heating system to create thick and dirty water. Eventually, it blocks up heating components.

However, in hard water areas, limescale can occur. Limescale is much harder to shift. On many occasions, where limescale has settled, the water will burn much hotter.

This can lead to the wrong readings being passed to sensors, the PCB and the boiler eventually locking out. More importantly, this can eventually lead to expensive components such as the heat exchanger cracking.

What happens if the heat exchanger cracks

If the heat exchanger cracks, it’s ability to heat water will be limited. More to the point, there’s a good chance it’s going to start leaking. And, boiler leaks can lead to damage of other boiler components.

Essentially, if the heat exchanger cracks on your boiler, you’ll want to get a replacement as soon as possible.

Unfortunately, heat exchangers for Baxi boilers are not cheap. You should expect to pay just under £500 to have a heat exchanger fitted to your boiler, including parts and labour.

If limescale builds-up near the NTC thermistor, how can that contribute to the 111 fault code being displayed

The NTC thermistor on the flow pipe monitors flow temperature. If limescale builds up near the thermistor, water is going to be slightly hotter here than it is in the rest of the heating system.

This could be fooling the NTC thermistor into thinking that the water is too hot. It passes on this reading to the boiler’s PCB and this will lock out the boiler until the problem is fixed.

What can be done to combat limescale in heating systems

There are ways to not just get rid of limescale, but to stop it from building up in your heating system in the future.

The first thing you’ll want your boiler repair engineer to do, is to run a hot flush. They can use specifically designed limescale reducing chemicals to breakdown limescale that’s already in the system. This can then be flushed out.

Now the majority of limescale has been removed from your system, you’ll want to ask them to fit a scale reducing filter. Once they dose the system with central heating inhibitor, this scale reducer will help to catch any limescale in the future; protecting your heating system.

What causes a circulation fault, and how could this be causing the 111 fault code to be displayed

The most obvious cause of a circulation fault is going to be a faulty pump. If the pump isn’t operating correctly, water isn’t leaving the heat exchanger quick enough. The boiler’s PCB is going to notice that water in the heat exchanger and water passing the flow pipe is too hot and will lock out the boiler.

Typically, your boiler engineer will want to inspect the pump. First, they’ll clean it out, removing any central heating sludge that might have built-up over the years. Once clean, they’ll need to then check that the bearings and shaft move freely. On many occasions, circulation faults come from a simple case of worn bearings.

With all that checked, they’ll want to ensure that the pump’s flow setting is correct.

Finally, your boiler engineer will want to check that the system’s pressure is correct. If the pressure (and therefore, amount of water in the heating system) drops, this can cause boiler parts to overheat. Although the boiler’s PCB should’ve recognised this, if there’s a faulty sensor somewhere, this might not be the case.

The NTC thermistor feeds back readings to the PCB to ensure the flow temperature is correct. So, it stands to reason, if the NTC thermistor isn’t working correctly, the readings it’s giving could be wrong, and this could lead to the boiler locking out when it shouldn’t.

Like with all fault codes, don’t rule out the PCB. The PCB controls all important electrical boiler components. And, it relies on the signals it receives to make a decision (such as to fire up the boiler or lock it out). If the boiler’s PCB has somehow become damaged, it could be displaying incorrect fault codes and work intermittently.

Like the NTC thermistor, your boiler engineer will be able to test the PCB using a multi-meter to determine if it needs replacing.