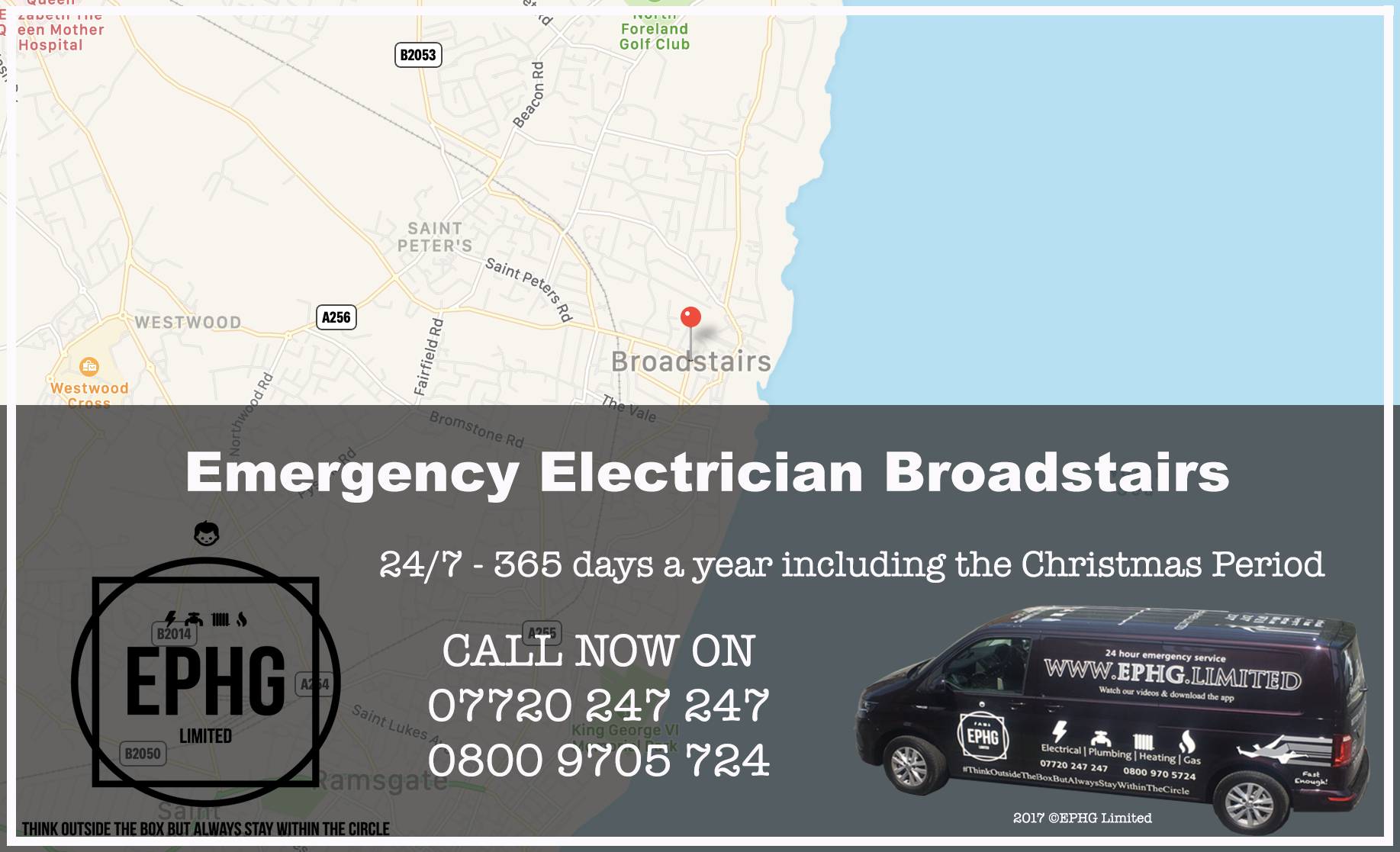 Got an electircal problem in Broadstairs & require a 24 hour emergency electrician Broadstairs.

The contractors EPHG have on their system specialise in all types of electrical emergencies subject to what each engineer is competent to work on, but not only do we take care of your electrical repairs in Broadstairs, we also have a list of fully qualified emergency plumbers, heating engineers and 24 hour gas engineers on our system. Before you decide to book us after searching for an emergency electrician near Broadstairs, please watch the video or just give us a call on the above number 07720 247 247.

Please note, to get a better understanding about us, you can visit the home page and follow our terms by clicking here.

The type of properties the contractors work on when you search for an domestic emergency electricians Broadstairs could be anything between a 1 bedroom flat up to a 5 bedroom house and if you're looking for a commercial electirian in Broadstairs, we also have a list of electricians that could also help you out in a situation depending on the issue in question.

The type of call-outs we deal with for the domestic & commerical properties come under urgent maintenance & repairs.

In some circumstance when an engineer tried to make an electrical repair, there may be special materials required that need to either be picked up from a shop or an order may have to be made.

Do you wonder what type of call-outs the 24 our electricians Broadstairs do then please note we have a list of engineer specialize in emergencies from stoping your house alarm from going off, getting your electricity back on when your consumer unit is tripping due to an electric appliance fault and many other issues.

When you get an electrical fault and your consumer unit is tripping, our aim is to get your consumers board back on and working again as soon as possible however these target may not be met due to safety reason.

We do many service such an emergency electrician, emergency plumbing, emergency heating engineer and emergency boiler repair in Broadstairs and the surrounding area.

As we specialise in a 24 hour electrical service Broadstairs, this means it doesn't matter if you call us at 02:00 early hours of the morning or 14:00 in the middle of the day, we will still try to organise a contractor to come out to you regardless of the time, however please note that the rates will reflect the time the contractor comes out to you as a 24 hour electrician in Broadstairs.

An emergency electrician Broadstairs could mean a 24 hour electrician, the difference is that the emergency means that we respond immediately and within a reasonable time due to the nature of the problem.

Please note when calling a 24 hour emergency electrician in Broadstairs, we're a large business of about 7 employees and over 1000 contractors and what the staff asked for is a non-returnable deposit upfront and the rest paid directly to the engineer at the engineer of the work for each and everytime we send a 24 hour electrician out where ever it's in the middle of the day, at midnight or any time. The deposit needs to be paid before the booking is complete and we organise the emergency electrician in Broadstairs to call out.

Please note when using our emergency electrical service in Broadstairs that we are a large company, the engineer may not live in Broadstairs and maybe coming from out of the area and if we can't get you electrical engineer from these areas then we will at least try to get you an out of area electrician near Broadstairs.

Please note if you liked the video above and would like to see more videos alike then click into one of our area pages below and start searching through as we have a video on each page dedicated to each area.

If your looking for Broadstairs Electrician 24 hours in the surrounding areas then we are happy to help in an emergency 24 hours.

Just to remind you that the areas we covere for electrical problems in Broadstairs are the following: Bridge, Canterbury, Deal, Dover, Elvington, Eastry, Eythorne, Herne Bay, Littlebourne, Lydden, Margate, Minster, Ramsgate, Shepherdswell, Sturry, Sandwich, Wingham, Worth and Whitstable. Broadstairs is in Kent, and home to towns Maidstone, Gillingham and Dartford.

Looking for another service and not just Broadstairs 24 hour Electrician, here are some links to other services we do in the same area such as a plumber, boiler repair or maybe you need a central heating power flush

Back to 24 hour emergency electrician.