The Vokera fault code A03 fan fault problem Q & A or require an engineer for an emergency boiler repair.

Just below, we have a list of common questions relating to the A03 fault code on the Vokera boiler. 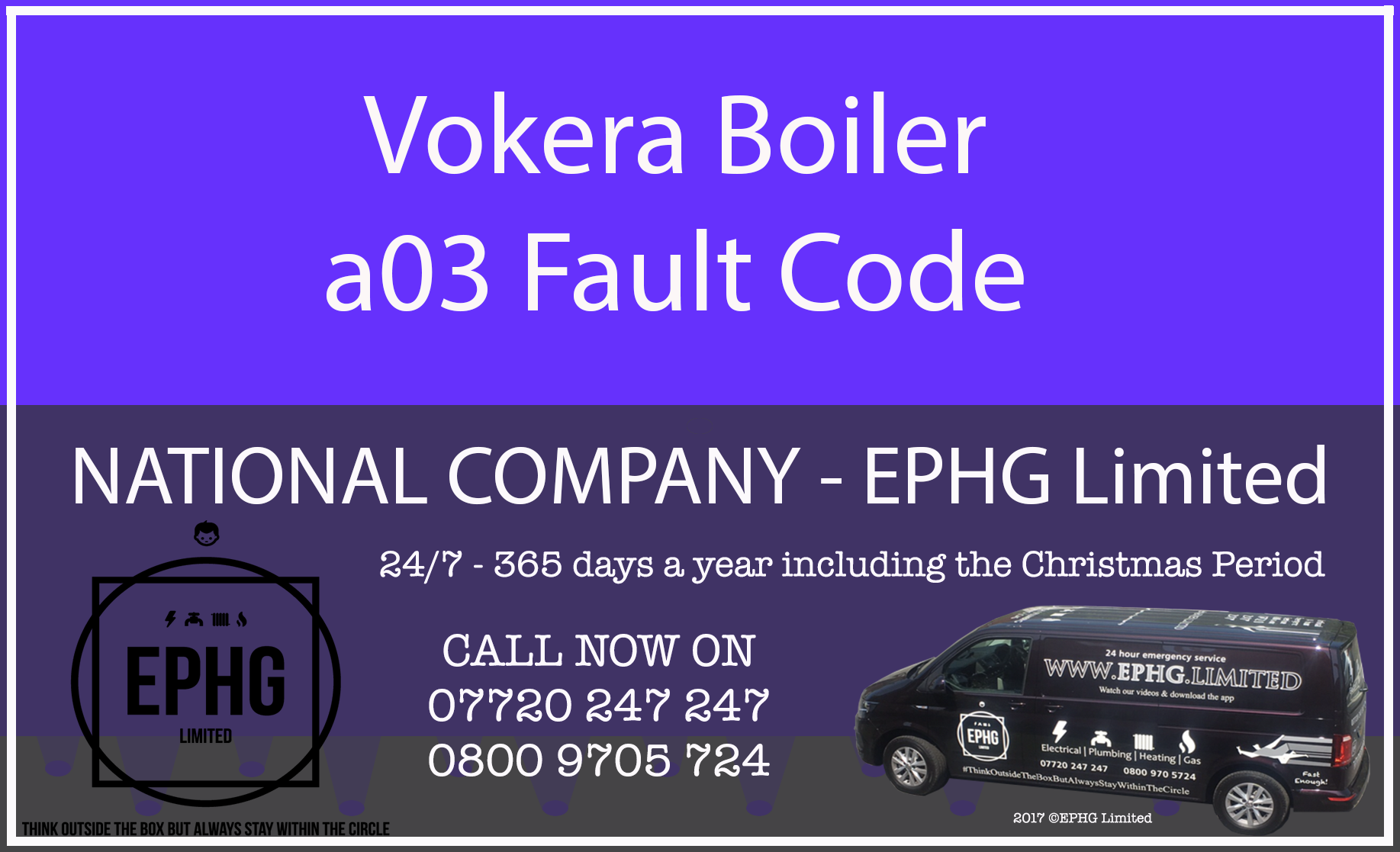 What does the A03 fault code mean on my Vokera boiler?

When your boiler displays a fault code, it’s a way of showing your Gas Safe engineer the possible cause of the problem.

In this case, the A03 fault code on Vokera boilers means that there is a problem with the fan.

Why does my boiler stop working and display the A03 fault code?

Most boiler fault codes will lead to what’s called a boiler lock out – your boiler will stop working.

These lock outs are put into place as a precautionary measure.

On some occasions they stop a boiler running. If they continued to operate, they’d be putting strain on internal boiler components and cause expensive damage.

In the case of the A03 fault code, it’s more likely the boiler locks out as a precaution to keep people in a property safe.

If a fan is not working, the boiler could be dangerous.

Why is a boiler dangerous if there is a problem with the fan?

Your boiler’s fan doesn’t work like a fan on a car.

Instead of cooling down internal components, it helps to create a draught which in turn, lets harmful gases escape via the flue.

When the fan isn’t working correctly (or at all), the boiler’s printed circuit board (PCB) recognises this and locks out. The harmful flue gases are not being taken from the boiler.

The fan doesn’t have to stop working completely for the boiler to display the A03 fault code and lock out.

For example, the fan speed could be too low, and therefore most flue gases are not being removed from the boiler.

Can I reset my Vokera boiler to clear the A03 fault code?

Reset functions on boilers aren’t designed to fix faults. They’re designed to be used once a Gas Safe engineer has found and fixed the problem.

There is no DIY fix for a faulty fan. Working on gas appliances is something that should only be done by those that are qualified.

So, you should be calling a boiler engineer.

My fan is working but my boiler is showing the A03 fault code, what could be the problem?

One of the most common causes of the A03 fault code being displayed is a fan that has a speed setting that is too low.

This is typically the case if:

In both cases, it’s likely the boiler’s fan came from the manufacturer with the incorrect speed setting.

Is there a fix for a boiler fan if the speed is too low?

More modern and complex boiler fans have different speed settings. Your boiler engineer will be able to take apart your boiler and adjust the boiler’s fan.

They’ll need to test that after adjusting the fan’s speed setting, it’s not too fast.

My boiler’s fan works sporadically and only on occasion the A03 code is displayed, what’s the problem?

When electrical components in your Vokera boiler work sporadically, the first place is to start is the wiring and connections to that component.

Typically, we’ll find that either:

When the fault relates to loose connections or wiring, a Gas Safe engineer will be able to re-secure them.

They’ll then test the component using a multi-meter to ensure that the loose connections and wiring are the only issues with the fan.

The boiler engineer thinks water damage has caused the A03 code to occur, how would that happen?

Water damage usually comes from leaking components inside the boiler. The most common examples include a cracked heat exchanger and a leaking heating pump.

When water drips from these components, it’s heated by the internal temperature of the boiler. This creates condensation that gets into wiring, connections and electrical components.

Water damage is the most serious kind of boiler fault. Not because it’s caused the fault with the fan/wiring/connections, but because there’s a good chance that it’s caused damage elsewhere.

Before spending money replacing a fan, it’s important to get your engineer to check the extent of the damage by checking all electrical parts in your boiler.

My boiler engineer thinks the fan has failed completely, do I need a new boiler?

To fix the A03 fault code and the fan, a replacement will be needed.

Whether or not you need a new boiler will depend on the condition of other expensive boiler parts.

The most expensive boiler components include the:

Assuming all these components are in good condition, we’d suggest going ahead and replacing the fan.

However, if 2+ of the above parts are showing signs of excessive wear, the repair bill would be in the region of half the cost of a brand-new boiler.

So, you’d be much better off investing the cash in a brand-new boiler with a warranty, rather than an old boiler that is already showing signs of weakness.

My other boiler parts are in good condition, how much should I expect to pay for a fan?

Like cars, boilers come in all shapes and sizes. Different models will have different repair costs attached to them.

However, as a guideline you should expect to pay around £250 to have your new fan installed on your Vokera boiler.

My boiler engineer has tested the air pressure switch and thinks that is the problem, but I thought this was a fan fault?

Boilers don’t have a particularly complex fault code system. And if there’s a fault, there’s always the chance that the most accurate fault code isn’t displayed.

However, the air pressure switch is closely related to the fan.

The fan needs to run before the boiler ignites. The air pressure switch determines whether the fan is running and feeds back this information to the PCB. All being well, the PCB will then tell the boiler to ignite.

Let’s assume the air pressure switch is faulty. It might not be recognising the fan is running, and therefore the boiler won’t fire up.

In this case, assuming there are no other faults, an air pressure switch replacement will solve the problem.

How much does it cost to replace the air pressure switch on a Vokera boiler?

The air pressure switch on your Vokera boiler isn’t the most expensive part to fix, but it’s still not cheap.

You should expect to pay somewhere in the region of £200 for a replacement switch.

My boiler engineer says the PCB has failed and will cost over £500 to fix, is this right?

When there’s a potential fault with any electrical component, the PCB needs to be ruled out as the culprit.

All electrical components in your Vokera boiler will give and receive signals from the PCB. If the PCB is faulty, the signals given and received could be wrong.

In the case of the A03 fault code, it may be given a signal that the fan is working but may not be processing that signal correctly.

So, it is a possibility that the PCB could be faulty. And if it is, a replacement can cost over £500.

However, it’s important that the PCB and all other components are tested using a multi-meter.

We’ve heard many horror stories where the PCB has been incorrectly diagnosed, leading to a large repair bill, and still hasn’t fixed the problem.

And, like replacing the fan, make sure other important components don’t need replacing.

If you need to replace the PCB and other important components to clear the A03 fault code, you’d be much better off investing in a new boiler.