The Vokera fault code A01 boiler ignition problem Q & A or require an engineer for an emergency boiler repair.

Just below, we have a list of common questions relating to the A01 fault code on the Vokera boiler. 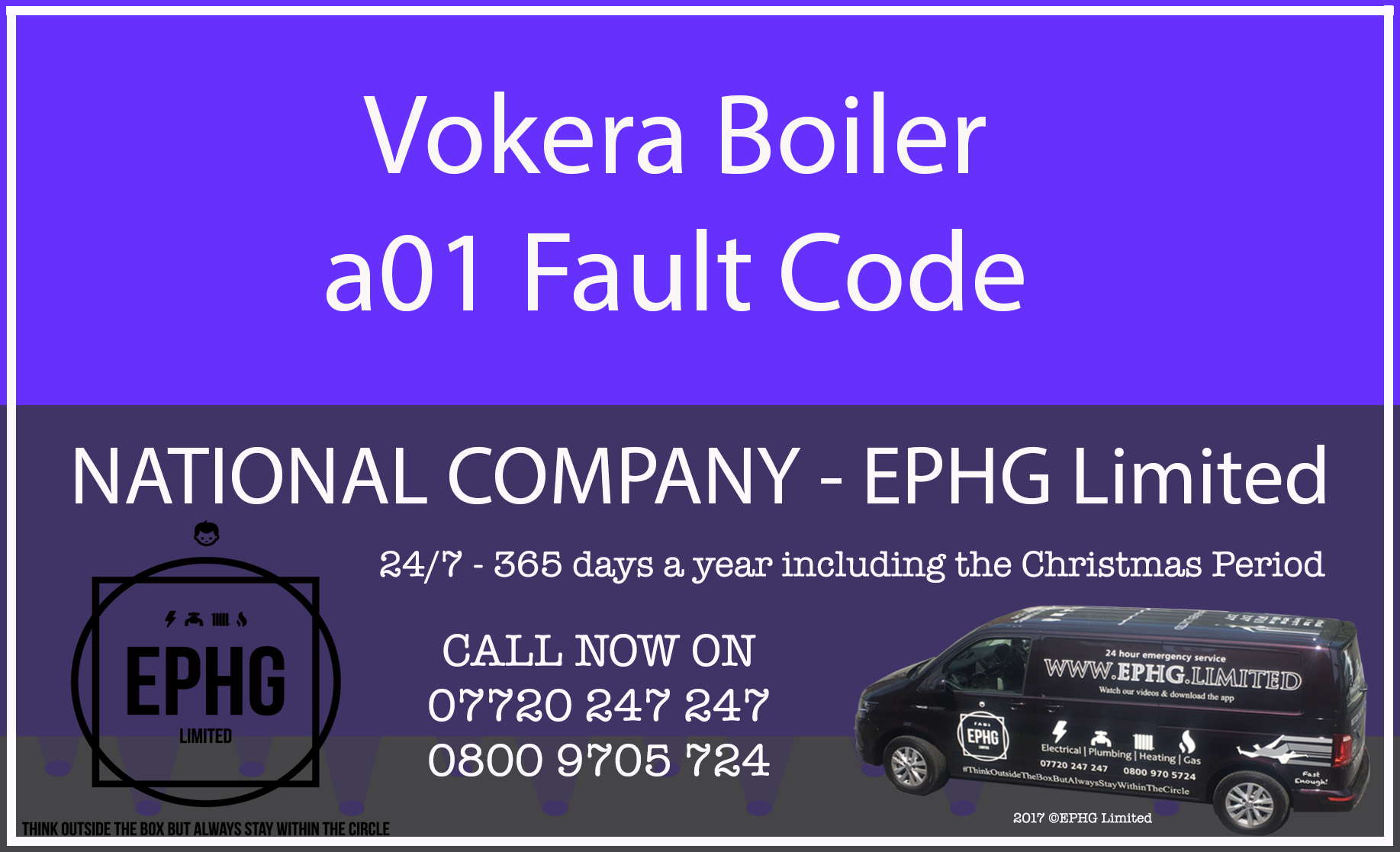 What does the A01 fault code mean on my Vokera boiler?

When your Vokera boiler has a problem, it will lock out and display a relevant fault code. This fault code is designed to give a Gas Safe engineer an indication of the problem.

In the case of the A01 fault code, there has been an ignition problem. The boiler hasn’t recognised a flame after heat has been demanded and the printed circuit board (PCB) has given the signals for the boiler to ignite.

If I reset my boiler, it works again for a few minutes then locks out, what is the problem?

A boiler reset is a function integrated by manufacturers for when the fault has been fixed, not as a fix.

When resetting a boiler, it is possible to fool the appliance into thinking the problem has been fixed (temporarily).

However, the sensors quickly notice that the original issue is still present, and the lock out procedure begins again.

Is resetting my Vokera boiler dangerous?

With a gas appliance which has already given an indication of an ignition-based issue, you shouldn’t be resetting your boiler.

A boiler’s lock out function is there to protect you (whereby the boiler maybe unsafe to operate) and boiler parts (whereby operation could cause damage).

There’s always a chance that a reset could cause a boiler to operate in dangerous conditions.

So, call a Gas Safe engineer to fix the problem, and leave the reset to them.

What could be causing the A01 fault code to be displayed on my Vokera boiler?

Anything that is part of or connected to the ignition could be causing the ignition failure, flame sensing issues and the A01 fault to be displayed.

The most obvious places to start would be the:

But, fault codes are rarely specific. And that could mean any of the following parts could also be causing issues:

What is the flame sensor in my Vokera boiler?

The flame sensor does exactly what it says on the tin. Your boiler needs a steady flow of gas to keep the burner going, and the heat exchanger producing hot water.

When a flame isn’t present, there’s always a chance that gas is letting by and not being burnt, which could be dangerous.

The flame sensor gives and receives signals to/from the PCB. If the PCB doesn’t recognise a flame, it will lock out.

What problems occur with flame sensors, and what’s the fix?

However, before they do this, it’s likely they’ll check the wiring and connections to and from the flame sensor. If either of these are loose or damaged, they’ll need to be re-secured/replaced.

If the flame sensor has failed or has loose/damaged connections, it could be feeding back incorrect signals to the PCB. So, your boiler might have a perfectly good flame, but the sensor isn’t recognising it.

If the A01 fault relates to the ignition leads, can they be repaired?

The cost of most boiler repairs is mainly made up of labour. Boilers are complex to take apart, put back together, to test and sign off.

So, where possible it makes sense to replace components rather than repair them. Small repairs might last, but if they don’t you could be footing the repair bill all over again, in just a few months.

If the ignition leads on my Vokera boiler need replacing, how much should I expect to pay?

The cost of ignition leads will vary depending on the model of your boiler. Typically, we’d expect to budget around £200 for a replacement, which would include both parts and labour.

How could the gas valve be causing the A01 fault code to be displayed on my Vokera boiler?

Like any mechanical device, the gas valve isn’t free of problems. A dangerous problem we’ve come across is a gas valve that only partially closes; it’s stuck and is letting-by gas.

However, as the A01 fault code is most likely due to no flame, it’s more likely the gas valve is stuck closed.

So, as you demand for heat, the PCB tells the gas valve to open, but it doesn’t.

Can a Gas Safe engineer fix the gas valve to clear the A01 fault code?

A stuck gas valve can sometimes be freed. If your boiler engineer is happy with the operation of the valve, and all wiring and connections are in good condition, then freeing the valve will fix the problem.

However, if there are signs that the gas valve has the potential to fail, it’s much wiser to fit a replacement that will outlast the boiler.

If the gas valve needs to be replaced on my Vokera boiler, how much will it cost?

Most Gas Safe engineers will quote in the region of £300 for a replacement valve. This includes both labour and parts.

After the gas valve has been replaced, the boiler engineer will need to reset the boiler and test its operation. If the A01 fault code persists, then there’s another problem at hand, such as the PCB.

Why would the PCB cause problems that relate to the boiler’s ignition sequence?

The PCB controls every electronic part in your boiler.

It tells the ignition leads, the gas valve and diverter valve when to operate. It receives signals from the air pressure sensor and flame sensor. Essentially, it’s the heart of the boiler.

Unfortunately, that means that when even the smallest issue arises with the PCB, it can cause a boiler to completely malfunction.

The PCB could fail completely, but in many cases, we find it’s a simple case of loose/damaged wired connections that are causing the problem.

If it is connections that are causing the problem, the most cost-effective option here is to repair them.

Why would my PCB fail before other important boiler components?

PCBs are temperamental at the best of times. Besides old age, we find that water damage from an internal boiler leak is what causes damage.

Typically, these leaks come from either the heat exchanger, or the boiler’s pump. Even the smallest amount of moisture can find its way into the electrics, and that’s enough to cause a whole host of problems.

In fact, the bigger problem here is that if water has found its way into the boiler’s PCB, it’s likely caused damage elsewhere too.

How much will it cost if I need to replace the PCB on my Vokera boiler?

One boiler might cost as little as £350 for a PCB replacement, with others costing £500 or more. Essentially, it’s the most expensive part on your boiler.

We’ve heard horror stories of PCBs being replaced, only to find it doesn’t fix the fault.

If your engineer is 100% confident it is the PCB and other parts in the boiler are in good condition, a replacement is a cost-effective option.

However, if your boiler is old and other parts are likely to fail soon, it might be time to invest that cash in a brand-new boiler.