Just below is a common list of toilet problems, with the complimentary of 2D images, and the option of 3D toilet art, that you can also see on your own devices in 3 dimensional, offering a unique platform and new ways of looking at toilet problems.


11 Common questions and thoughts about toilet problems in 3D & Voiceover 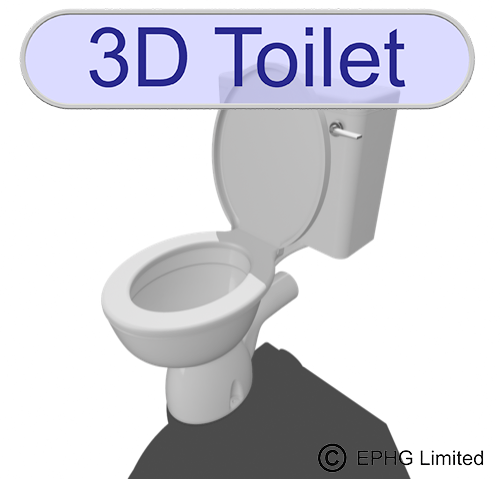 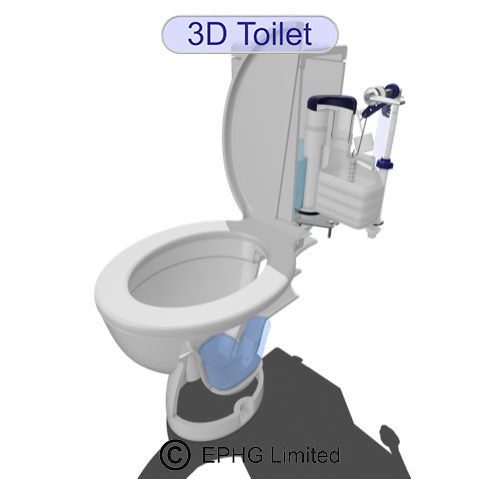 3d digital toilet problems is a new way of showing a toilet problem, but in 3 dimensions. Just below, you will see a window of a toilet that you can click on using your own device, then take a look at the toilet cut in half, to help give you a better understanding.

Not only can you look at the toilet problem in 3D, you can also listen to the recording well visualising the 3 dimensional asset. 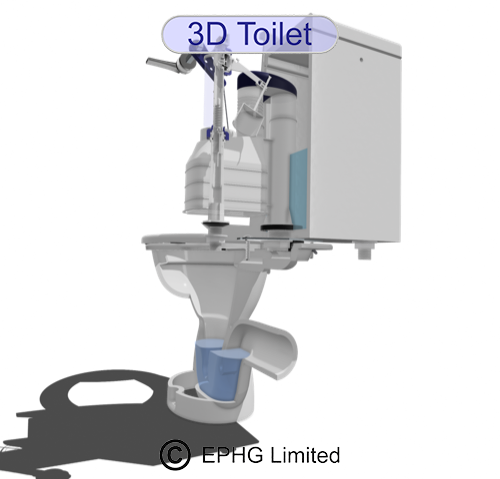 Inside a typical toilet, you will either find a push button or a toilet syphon, being operated by either a toilet handle, or push button.

In all toilet cisterns, there will also be a filling valve, ready to fill your toilet when the cistern is empty or not full enough.

In some toilets, you will find an overflow, where in others, the toilet overflow users the toilet syphon or the toilet flushing operator, connected to the push button. 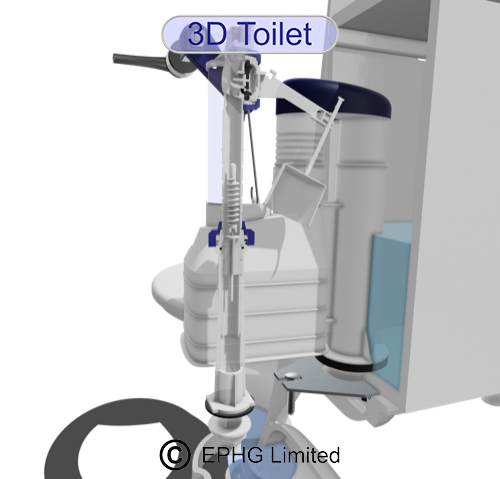 In most toilets, the filling valve, allows for an arm to lift, and press against the washer, to stop the water from flowing through, and in some toilet cisterns, such as the Torbeck valve, this could allow for a more clever approach, such as the washer, the air, and the water to use more of a balanced approach to cut the water off, seen in the image.

In many filling valves filling the toilet cistern, you can find a filter, with an example of a filter in the Torbeck valve in the image. This can easily get blocked, if your water has dirt inside it, sometimes caused by external water mains work. Like the filter in the images, this can be taken out and checked for debris.

Many filling valves have a water flow reducing part inside, that allows the float operation valve to run better, which saves the toilet cistern from filling up too quickly.

After many years of the washer being in use, depending on usage, the washer can go faulty, and like most toilet valves, toilet washers can be replace. 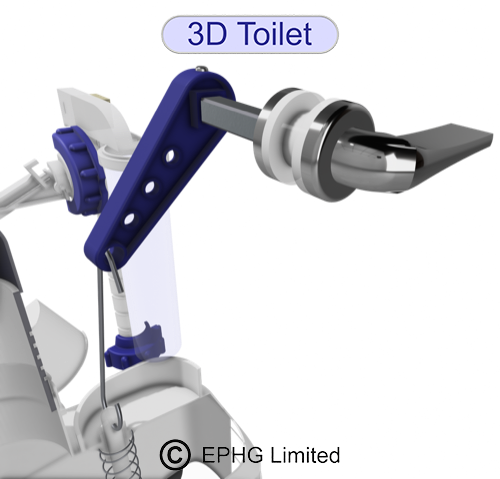 In regards to flushing the toilet using the traditional toilet handle, to flush the toilet, you would handle the lever and action it, in a downwards position for the lever to lift the arm that the hook is attached too.

If at all any of the toilet handle components are broken, the arm is likely no longer to lift the diaphragm within the toilet syphon.

In some circumstances, the toilet flushing arm is too long, where many of the universal ones allow you to cut them down to their required length, this can cause the flushing handle to get jammed, and sometimes cause other issues such as water leaks near or on the toilet syphon.

Water From Cistern To Pan 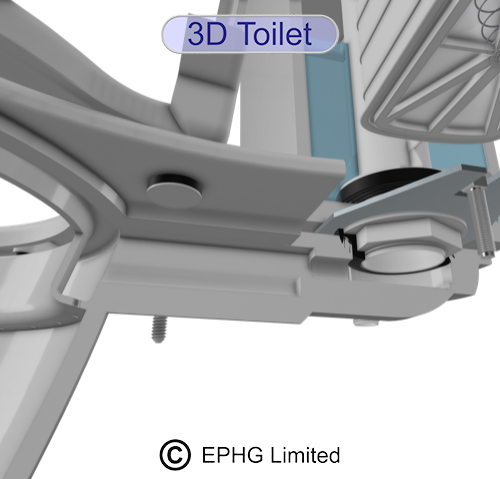 Once someone presses the toilet button, or pulls on the toilet handle, the water would pass through the flushing operator, and into the entry of the toilet pan.

Once the water enters the toilet pan, it would pass through a tunnel towards the lip underneath the toilet seat, where another tunnel would go all around the lip.

Many manufactures would design the holes in such a way, to allow the excreta, also known as Feces to move through the toilet as best as it can, and move through as to the design of the toilet. 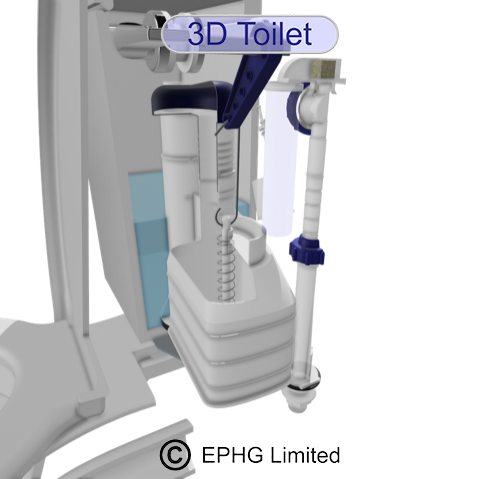 Toilet flushing mechanisms, known as syphons or valves, are mechanisms that either allow for a vacuum of water, or a weight of water to pass through, until the amount of water was to drop enough, to stop the vacuum, or the weight of water not being enough.

The most common problems with toilet syphon are that there isn’t enough water the create a vacuum when flushed, which could be due to not enough water in the toilet cistern, or the diaphragm being split or/and not being enough.

The most common problem with the push button toilet, is the lack of water, or a component not being adjusted correctly or broken.

The washer being at fault to the push button toilet device, doesn’t normally stop the cistern from being flush, but it can allow for water to continuously to pass through water, until the washer is either replaced or fixed.

One of the reasons to a toilet washer on the flushing device, is that it can be full of dirty, and by cleaning the dirt, this can place a better seat for the device to shut off correctly, holding the water back.

Another little trick where the washer is a little warn, it to turn the washer around, however, it is likely the washer would remain weak, and it is better to just replace it, rather than just repair. 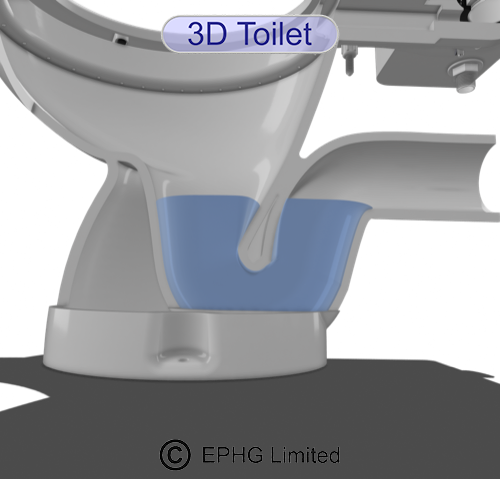 The toilet trap was invented in 1775, and was defined in better detail over the ages, and what the toilet is today.

The toilet trap was built to keep foul air from entering the room, from the soil stack, or/and the outside drains, keeping the foul smells out.

A common problem with the toilet trap is, it can easily get blocked up, mostly from toilet designed with a smaller exit, or the soil/Feces poop, with or without, toilet paper being too much.

In some circumstance, objects are put down the toilet, that shouldn’t be flushed down, such as toilet wipes, mostly the type that don’t disintegrate, or other objects, such as kids toys.

In most cases, you could get a 4 inch plunger with a rod, to easily press into the trap and unblocked the toilet, or use some other unblocking device, suitable for unblocking toilets.

In most cases, a blockage is normally found within the trap, and not external to the toilet, to test this, in most cases, if nothing else is blocked, or the toilet doesn’t fill up, when running other local outlets, the blockage is in the pan.

In some circumstances, if you can’t unblock the toilet, and unable to try, you may need an emergency plumber. If the blockage is external to the toilet pan, you may need a drainage specialist, and not just a plumber.

A leaking toilet, can be caused by many different toilet problems, such as accidentally breaking the cistern and cracking it, knocking the toilet, or washes becoming too worn, causing the fittings to not sit correctly, you may need an emergency plumber to attend and fix or make safe, so that no further damage is being caused.

In some cases, you can isolate the water by turning the isolation valve off, just before the entry to the float operating valve. This should stop the water from entering the toilet, and therefore reduced the amount of water inside the toilet cistern until empty.

If you can stop the water from entering the toilet, you could flush the toilet and use a sponge or some other absorbing material to empty the cistern, and if you have a water vacuum machine, even better.

Water vacuums can be used, when a major incident of water escaping, helps to ensure the amount of damaged is being reduced, in an emergency situation, well, you or an emergency plumber is called upon, to make safe of the leaking toilet.

Just below, I will include a 3D toilet, known as a 3 dimensional toilet, for you to visualise, in 3D or in AR, to be able project the toilet on your device, so you can get a look at what a toilet looks like in your room of your home, so you can get a feel for it’s size and what the toilet would look like in digital and in real life, using digital assets.

Do feel free to try this out by checking the visual 3D digital toilet below.

The digital asset below was built by Meta Home Limited, a sister company to EPHG Limited and owned by the same CEO of both companies.

If your looking for a service with the above expected problems, you can use our services, however, please keep in mind, that if you required a drainage engineer, the decision would be entirely your own to using a plumber or a drainage engineer, subject to where the blockage is, sometimes unknown to the consumer or the trades person, until work is in progress.

In most circumstances, a toilet problem can be fixed within the hour, however, taking into considerations of some difficulties, when working on toilet, some parts may be hard to replace depending on the circumstance of the toilet.

On most emergency call-outs, basic parts can be used, but as the centuries pass by, toilet parts become more difficult as a diverse of parts of being use, getting more technical, and more unique to the brand, of each toilet being fitted, in the common houses of today. This means, that in some circumstance, only a make safe could be made, well parts have to be order.

Other related articles that you want to take a look at similar to this article.