The Potterton fault code E384 false flame Q & A or require an engineer for an emergency boiler repair.

Just below, we have a list of common questions relating to the E384 fault code on the Potterton boiler. 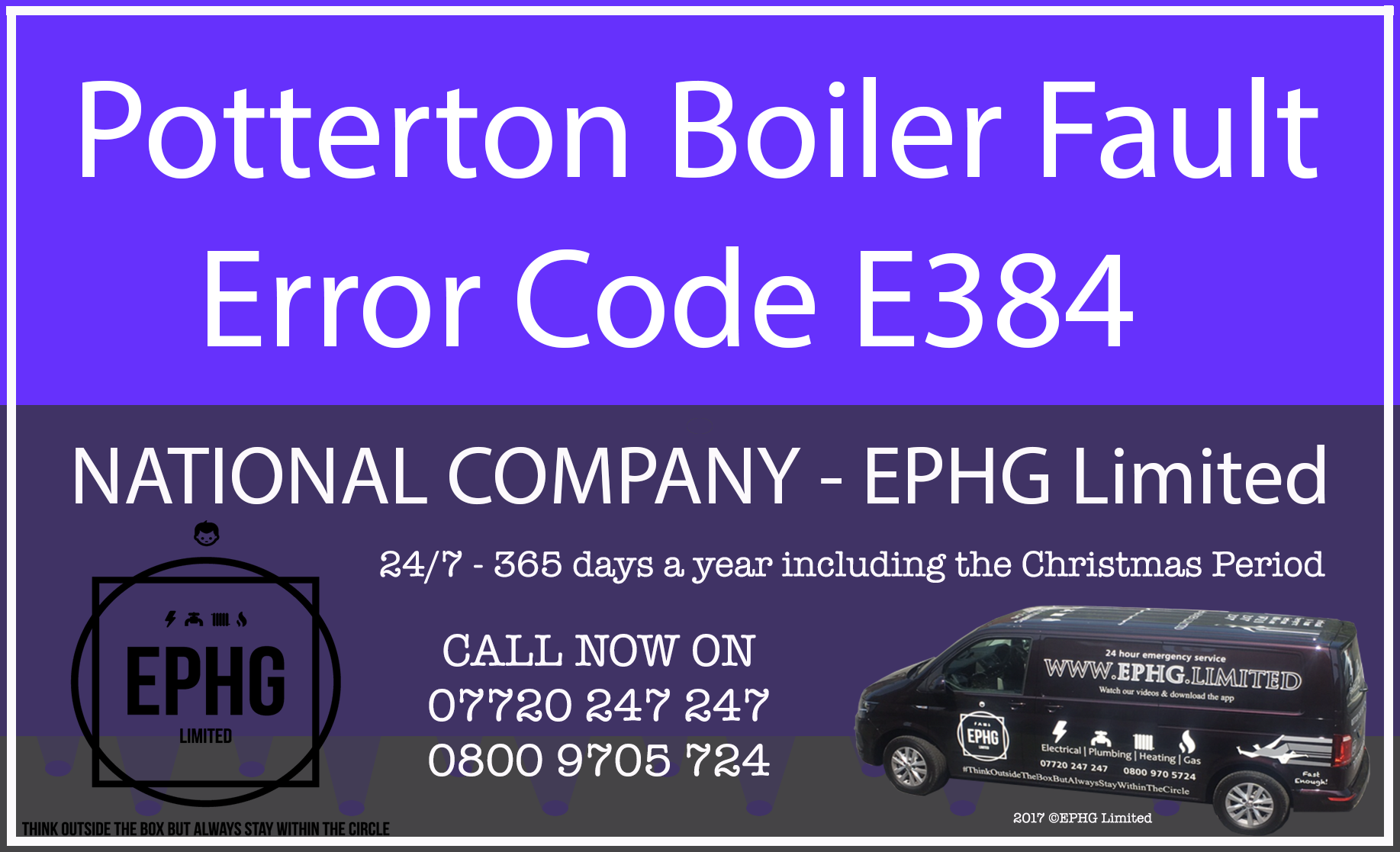 What does the E384 fault code mean on my Potterton boiler

According to Potterton, the E384 boiler fault code relates to a false flame. Essentially, the boiler’s printed circuit board (PCB) either thinks there is a flame when there shouldn’t be, such as when the gas valve should be closed.

Is a boiler with a false flame fault dangerous

As this is a fault that relates to the incorrect supply of gas, it’s potentially dangerous if the boiler continues to operate. What the boiler should have done, is shown the E384 fault code on the display panel, and then locked out.

If your boiler hasn’t locked out, you should turn off your appliance and call a Gas Safe boiler repair engineer immediately.

Can I reset my boiler to fix the problem

The reset function on your appliance isn’t designed to fix boiler problems. In fact, it’s dangerous to use it with this goal in mind.

Instead of resetting your boiler, get an emergency boiler repair company to highlight the problem and fix it. They’ll reset your boiler for you.

There are only a few errors on modern boilers that can be fixed on a DIY basis. For example, topping up the pressure on a boiler, after a leak has been fixed.

Any task that involves taking apart a gas appliance, can only be completed by a Gas Safe engineer.

What can cause a boiler to produce a false flame

The major components that can contribute to the E384 fault code being displayed are the:

But, there are plenty of other issues that can contribute to the problem including:

The first place your Gas Safe engineer will start, is with the gas valve.

However, like most mechanical components, they wear with age and can eventually start sticking. Although gas valves can stick fully closed (allowing no gas into the burner), it’s more likely that the valve has stuck partially open.

With the gas valve partially open, it’s still “letting-by” gas into the burner, even when the PCB has told it to close fully.

Can a gas valve that’s sticking be fixed, or will it need to be replaced

The good news is, many gas valves that are sticking, can be freed. But, your boiler company will only refit the used valve, if it’s in good condition and it’s unlikely this problem is going to happen again. If the valve is beyond repair, a new valve will need to be fitted.

If the valve isn’t sticking, what could be the problem

The next thing your boiler engineer will want to check, is the wiring harness to the PCB, from the gas valve. Due to internal boiler vibrations, there’s a chance that the connections here have become loose or damaged. These can be re-secured or replaced to fix the problem.

However, if your boiler engineer notices multiple burnt-out connections, there’s a chance that this is due to a boiler leak. Before working on anything electrical, they’ll want to assess the damage done by the leak and fix that leak as soon as possible.

It’s common that the E384 fault code is either the gas valve or PCB. But in the case of a boiler leak, there’s a good chance that moisture has found its way into both components and has damaged them.

If the gas valve needs replacing on my boiler, how much is it likely to cost

The cost of a replacement gas valve will depend on exact boiler you own. However, a typical price expectation, should be in the region of £300. If there are no other faults with your boiler, the problem should be fixed within 1 working day.

The PCB gives and receives signals to all components in your boiler. And, that includes telling the gas valve to open, as well as receiving a signal from the flame sensor so it knows when the burner is operating.

The problem with this, is that when the PCB fails, it’s hard to determine whether the fault code is correct, or it’s just the PCB malfunctioning.

For instance, the E384 fault code suggesting the false flame, could be a flame sensing error, or even a PCB error.

So, your boiler engineer won’t just need to test the gas valve, but they’ll need to check the operation of both the PCB, and the flame sensor too.

How can a boiler engineer test the PCB to see if it’s at fault?

After taking apart the boiler, the engineer will want to first, start with a visual inspection. This is going to highlight any water damage, which usually comes in the form out burnt out connections, or loose/damaged wiring.

If even one of these issues presents itself, that’s enough to interrupt the operation of the PCB, meaning that the signals that it gives/receives won’t be correct.

What causes electrical damage in a boiler

As we’ve already mentioned, leaks that lead to electrical damage is common in boilers. This usually comes from leaking pump seals, or a cracked heat exchanger.

Before going ahead and fixing the PCB, the boiler engineer will need to find and fix the leak. If not, the problem is going to re-occur almost instantly. And, they’ll also need to check that the water damage has been limited to the PCB, and not caused issues with other important components such as the gas valve, ignition leads, or even the spark generator.

Next, they’ll inspect the boiler looking for loose connections. Boiler vibrations, over years, can work connections loose. And, sometimes all that’s needed is to re-secure these connections.

The connections and wiring look good, what is the next test

Your boiler repair company will want to test the multi-meter and gas valve using a multi-meter. This determines whether the power they’re getting is sufficient.

If the boiler engineer can’t repair the PCB via replacement wiring or re-securing connections, it’s likely a replacement is going to be needed to clear the E384 fault code.

If I need a new PCB, how much is it going to cost

The PCB on your boiler isn’t a cheap component to replace. Typically, you should expect to budget somewhere in the region of £400-500. This includes all parts and labour, and the job will usually take 1 day.

But, we’d always suggest with repairs that are this expensive, that you have your engineer check the overall condition of your boiler. That means inspecting the gas valve, pump, heat exchanger, ignition leads and more.

If it’s likely that any of these parts are going to fail soon, then that’s going to get the overall repair cost close to the cost of a boiler replacement. The difference is, a replacement will be more efficient (saving you cash on energy bills), not to mention coming with a warranty.