The Potterton fault code E160 lock out due to fan issue Q & A or require an engineer for an emergency boiler repair.

Just below, we have a list of common questions relating to the E160 fault code on the Potterton boiler. 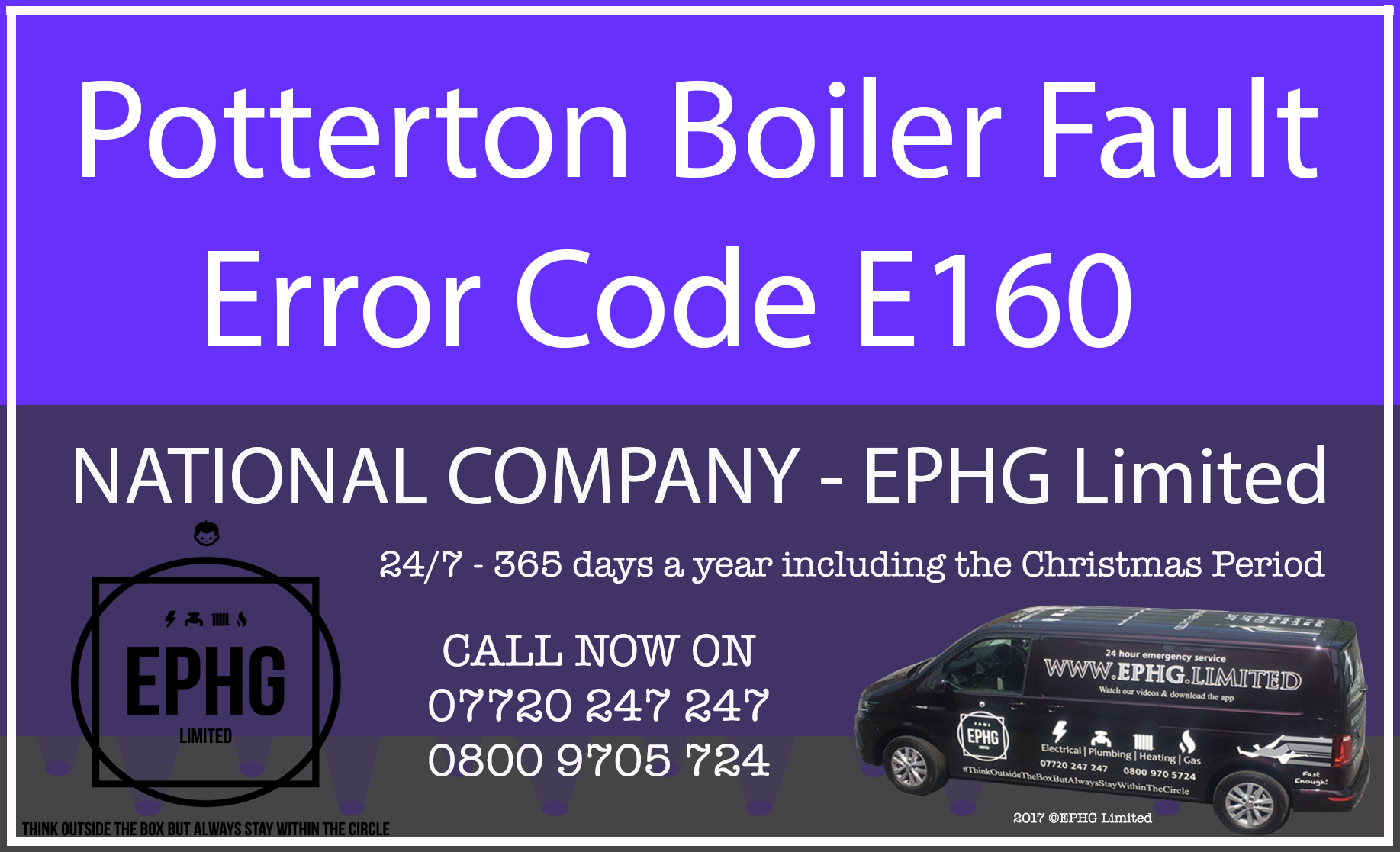 What does the E160 fault code mean on my Potterton boiler

In the case of the E160 fault code on Potterton boilers, the problem is with the fan. The issue lies with a faulty unit, incorrect adjustment, or problematic wiring.

The reset function on your boiler isn’t designed to clear fault codes, or to fix your boiler. Essentially, a reset tells the boiler that the problem has been fixed, and it’s safe to attempt to fire up again. In this case, and with any fan fault, it isn’t safe to reset the boiler.

If the E160 fault code keeps being displayed on your Potterton boiler, you need to call a Gas Safe registered engineer to fix the problem. Once the problem has been rectified, they’ll reset your boiler to clear the fault code.

What does the fan do on my Potterton boiler

The job of the fan is to create a draught in the flue. This helps flue gases escape, keeping everyone inside the property safe.

The fan is so important, that the boiler’s printed circuit board (PCB), needs to receive a signal from the air pressure switch to say the fan is running, before the boiler can even start.

So, if there’s any kind of problem with the fan, the PCB recognises that the boiler could be dangerous, and locks out, displaying a fault code in the process.

There are lots of faults that can lead to a fan on your Potterton boiler not working correctly, including:

And, although boiler fault codes are meant to be specific, they’re not hyper-specific. That means, the boiler can only try to determine the fault, and the code it displays isn’t always 100% representative of the fault at hand.

Other things can cause the fan not to operate, even though it’s functional, including:

What happens if the fan’s speed is incorrect

And, the air pressure switch is the sensor that monitors air pressure in the boiler. When flue gases aren’t being expelled, the PCB notices quickly. It will feed back the signal to the PCB that the boiler is unsafe, and the boiler will lock out.

Can a fan’s speed be adjusted, or will I need a more powerful one

The speed on a fan can be adjusted. You’ll need to talk to an emergency boiler repair engineer. They’ll be able to check the fan, adjust it, and reset your boiler to clear the E160 fault code.

If the fan is working, but working intermittently, there’s a good chance that the wiring and connections are to blame. The first thing your boiler repair specialist is going to want to do, is to visually check for loose wires, and burnt out connections.

If there’s nothing visible, they’ll be able to use their multi-meter to test each connection and section of wiring. This will determine if there’s a fault, and if so, where it is.

Once the fault has been found, they won’t have to replace the whole fan. Instead, they can replace the individual piece of wiring and/or connection that is causing the issue.

What could cause damage to wiring and connections

There are two things to look out for here:

Excessive boiler vibrations could be coming from worn out components, such as the pump. And, your boiler engineer will be able to check these components for wear.

Water damage can be a more significant issue. Not only could something expensive be leaking (such as the heat exchanger), it could have caused extensive damage besides the wiring/connection issues (such as water damage to the PCB).

If boiler vibrations or water damage have caused issues, it’s worth getting your engineer to do a full inspection of your boiler, to find the root cause of the problem.

My boiler engineer thinks the fan is faulty, how can they tell

As the boiler engineer will have already tested (and fixed, if necessary) wiring and connections, any lack of power to the boiler’s fan, will mean that a replacement is needed.

How much does it cost to replace a fan, and clear the E160 fault code on my Potterton boiler

The size and age of your boiler will determine the type, size and price of the fan that you currently have. So, the cost of a replacement is going to vary.

A reasonable guideline is to expect to pay somewhere in the region of £250-300. That’s going to include the cost of all parts and labour.

And, you should expect the repair to take around 1 working day to complete. But, fans are not components that heating engineers have lying around on their vans. So, they’ll need to order a new fan from a merchant, which could take a day or two.

How can the E160 fault code be connected to the PCB

It’s the PCB that decides what fault code needs to be displayed on the display panel, in this case the E160. But, it’s also connected to the fan. It gives signals for the fan to operate, stop, and receives signals from the air pressure switch to make sure the fan is working when it should.

So, the fan and PCB are interconnected. If the PCB was to fail, it’s feasible that it could think the fan isn’t running, even when it is.

And, it’s also advisable to check the PCB, before replacing expensive items such as the fan. The last thing you want to do is to spend £300 on a replacement fan, only to find that the issue is with the PCB.

My engineer has tested the PCB, and that’s at fault, how much will that cost to replace

The PCB is the single most expensive part to replace on a boiler. In general, you should expect to pay around £450 for a replacement. Like fans, the price will vary depending on the exact PCB needed, and the complexity of the install.

And, due to this being such an expensive repair, you need to consider all the options. Typically, if the PCB and even one other expensive part (fan, pump, gas valve etc.) are faulty, it makes more sense to replace the boiler. A new boiler is going to come with a parts warranty, which will mean you won’t have any expensive repair bills like this, for 2-10 years.

A flue blockage is directly related to the fan’s operation. If the flue is blocked, the fan won’t be able to push out harmful flue gases. The air pressure switch notices and passes on that signal to the PCB, and it locks out.

So, if the E160 fault code is still appearing, have your engineer check to see if an old flue hasn’t collapsed, or that there isn’t debris caught up inside.

What is a condensate blockage, and how will this contribute to the E160 fault code being displayed on my Potterton boiler

If it’s freezing outside and the E160 fault code has suddenly appeared, the condensate pipe could be the culprit.