The Potterton fault code E129 flame detection Q & A or require an engineer for an emergency boiler repair.

Just below, we have a list of common questions relating to the E129 fault code on the Potterton boiler. 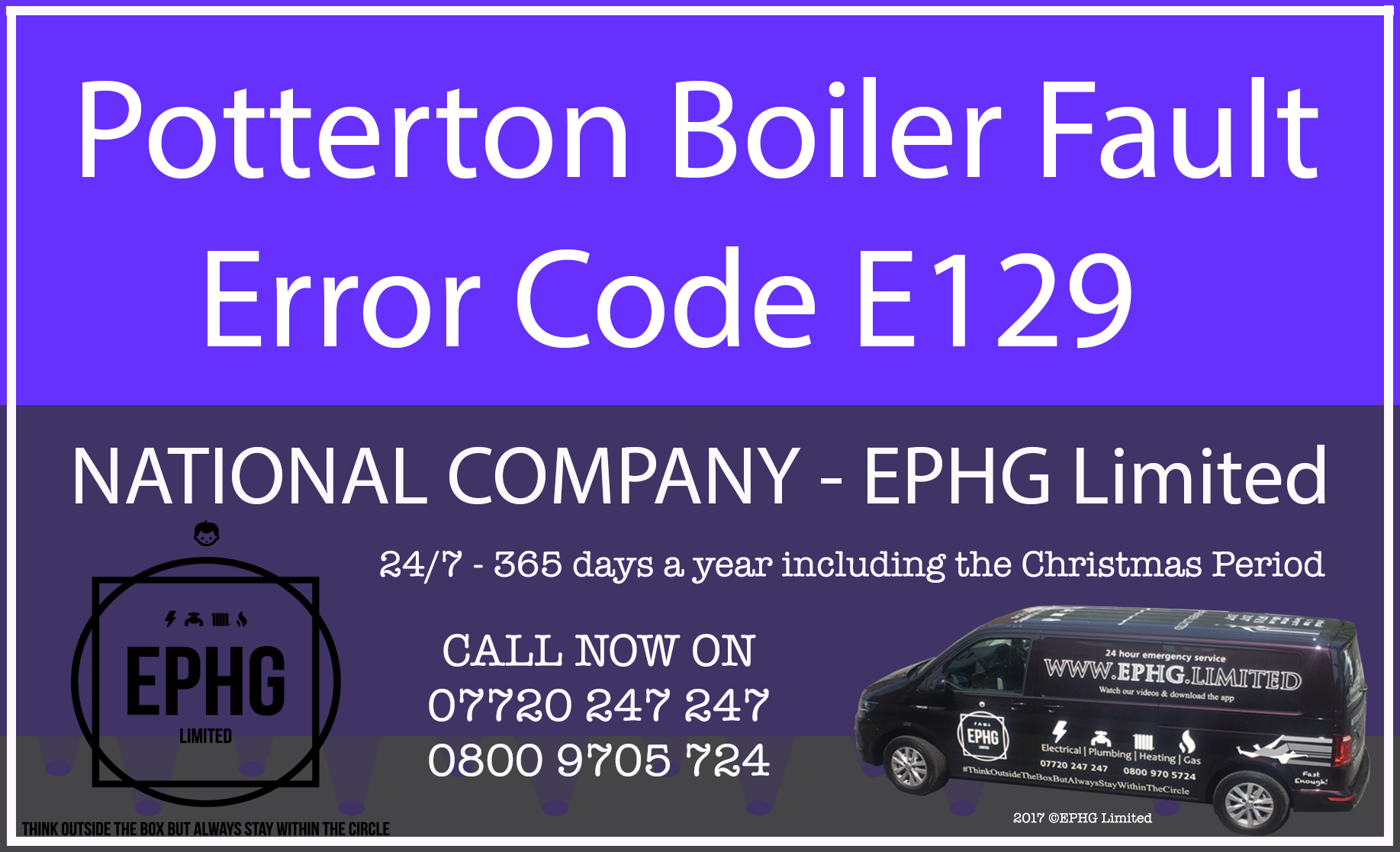 What does the E129 fault code mean on my Potterton boiler

If your Potterton boiler is displaying the E129 fault code on the display panel, there’s a problem with the detection of a flame. Your boiler is noticing that there’s flame loss on a basis that’s too frequent to be considered safe.

Once your boiler displays a fault code, it will usually lock out (but, not always). In this case, it should have locked out completely. This fault relates to a potential gas issue, and that means continued operation could be unsafe.

Modern boilers have a lockout function designed exactly for these instances. When they recognise a fault that could be potentially dangerous, they lock out (or, stop working), as continued operation would be dangerous. That said, in their locked-out state, they shouldn’t pose any danger.

Regardless, it’s hard to say for certain until the boiler has been checked. So, our advice would be to call a Gas Safe registered boiler repair engineer to inspect your appliance as soon as possible.

If I reset my boiler, will this fix the problem that’s causing the E129 fault code

You shouldn’t reset your boiler, without it being inspected and fixed first. Although it’s likely it will automatically lockout after each reset, if it doesn’t, it could be dangerous.

Instead of resetting your boiler, call a Gas Safe engineer. Once they’ve found and fixed the problem, they’ll be able to reset the boiler on your behalf.

What could be causing the flame signal issue on my boiler

If you’re having problems with a flame and the E129 fault code is being displayed on your Potterton boiler, the problem could stem from any of the below:

If the gas pressure to your boiler isn’t high enough, that’s not going to be supplying the burner with sufficient amounts of fuel. And, that’s going to lead to problems when it comes to establishing a flame.

Your boiler engineer will need to check the gas pressure on the appliance at both the boiler, and the gas meter. This helps to determine if there’s a problem with the gas run.

In colder months, they’ll also want to check the regulator on the meter. If the meter is exposed to the elements, there’s a good chance that this is frozen and is restricting the flow of gas to the boiler.

If the flue and condensate pipe are blocked, what will happen

The flue helps to vent dangerous gases from the boiler. And, the condensate pipe does the same, but with condensed boiler gases. If either of these are blocked (even partially), the boiler’s air pressure switch will notice that air pressure is incorrect.

It feeds back the signal to the printed circuit board (PCB); that’s what locks out your boiler and then shows the E129 fault code on the display panel.

Typically, we find that flue blockages are rare. That is, unless you have a vertical flue that hasn’t been fitted with a flue guard, and debris has managed to find its way in.

However, condensate pipe blockages are much more common. You’ll find that in the colder months, the condensed gases in the condensate pipe freeze easily. That creates a blockage and the boiler will lock out. In this case, simply thawing out the pipe with warm water will fix the problem.

How would the burner get blocked, and why does this lead to the E129 fault code being displayed

As the burner is constantly burning gas, over time there’s going to be carbon build-up. This isn’t necessarily a huge problem, until it finds its way into the jet.

Even the smallest particle of carbon could cause a blockage that means there’s not enough gas to establish a flame. And, even if a flame is established, the supply of gas will fluctuate.

If carbon build-up is an issue with the burner, a replacement shouldn’t be needed. Your boiler engineer will be able to remove the carbon from the burner, and the jet. This will clear the blockage, allowing a steady flow of gas. With a quick reset after cleaning the burner, the E129 should be cleared and your Potterton boiler should work again.

What does the gas valve do, and how could this be causing issues with my Potterton boiler

The gas valve, like all electronic components in your boiler, is controlled by the PCB. When you demand hot water or heating, it tells the gas valve to open, and by how much. The gas valve responds by opening slightly, allowing fuel into the burner.

There are two main problems that occur frequently with gas valves:

It will be obvious if the gas valve isn’t in sync with the PCB’s demand. Even though all airways are clear, the flame in your boiler will struggle to stabilise.

If the gas valve’s adjustment is incorrect, this isn’t a fault that’s going to lead to a replacement. Instead, your engineer will be able to fine-tune your gas valve, so it’s supplying the correct amount of gas to the burner.

Is a replacement valve needed if it’s sticking

As valves wear, they don’t operate as smoothly as they should. And, this can lead to them sticking. If you have a valve that’s sticking, it won’t always need replacing. Your boiler repair engineer can free the valve.

But, if the valve is worn excessively and is likely to stick again, it makes much more sense to replace the component.

If I need a new gas valve, how much should I expect it to cost

A gas valve replacement on a Potterton boiler is likely to cost around £300; that includes parts and labour. And, generally, you should expect the job to be completed within one working day.

After fitting the valve and making any final adjustments, your boiler engineer will reset your boiler to clear the E129 fault code from the display panel.

What is the spark generator, and how can that cause the E129 fault code to be displayed

Most of the time, we find the E129 fault code on Potterton boilers relates to a flame fluctuation, rather than failure to establish a flame.

If the spark generator in your boiler is faulty, you’ll need your Potterton boiler repair specialist to fit a new one to fix the problem.

Another component that might be causing issues, is the flame sensor. It’s the sensor that tells the PCB whether the boiler has a stable flame. So, it stands to reason that if this component is faulty, the boiler will lockout; a flame is present, but not being recognised.

If the pilot light is lit, but the boiler keeps locking out and showing the E129 fault code, it’s likely the problem stems from the flame sensor.

But, before replacing the flame sensor, your boiler engineer will want to use their multi-meter to test electrical components. They’ll need to check the wiring and connections to and from the flame sensor, as well as to the PCB. This helps them to determine where the exact fault lies, based on electrical readings.