Just below, we have a list of common questions relationing to the E109 fault code on the Baxi boiler. 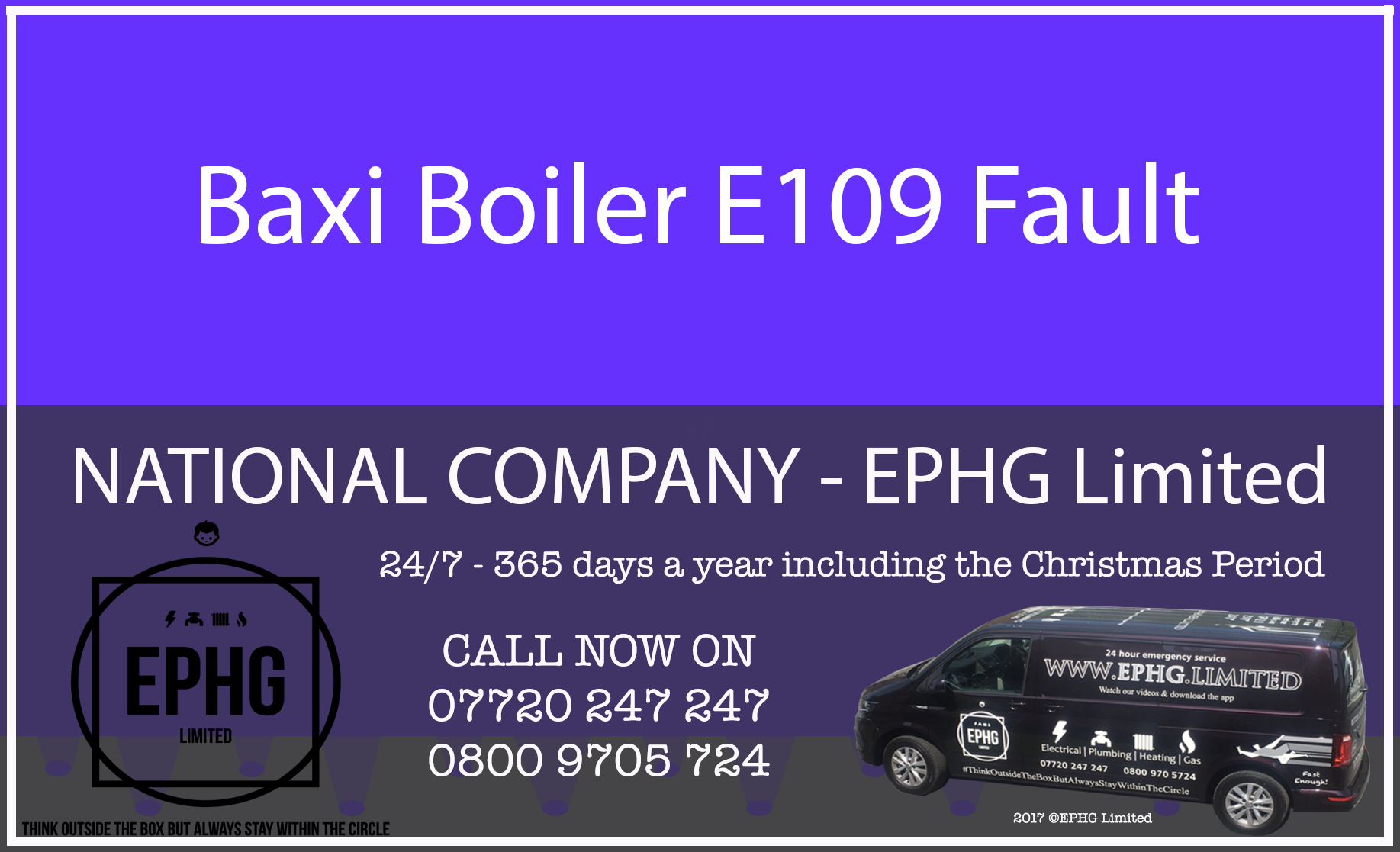 What does the E109 fault code mean on my Baxi boiler

Boilers have a fault code system built-in. When the boiler recognises a fault, the printed circuit board (PCB) will stop the boiler from working. On some occasions this is as a safety precaution. On other occasions it’s to stop further damage being caused to boiler parts.

The E109 fault code on Baxi boilers relates to poor circulation of water.

The boiler has a flow thermistor. This monitors temperature of water that’s leaving the boiler. This thermistor is either logging temperatures that are too high, that are rising too quickly, or the flow and return temperature differential is too high.

It’s rare that the E109 fault code is going to lead to a dangerous boiler. The dangerous faults are those that relate to gas, and whereby the boiler hasn’t locked out.

Once a boiler is locked out, it’s usually in a safe state. For this reason, you shouldn’t attempt to reset the boiler. Not only could this be dangerous, it might cause damage (for instance, the heat exchanger could overheat and crack).

Instead, you should call and emergency boiler engineer that has experience with Baxi boilers. They’ll be able to fix the fault and they’ll then reset your boiler for you.

What causes the E109 fault code to be displayed

Typically, the first component to check would be the pump. The pump is what controls the circulation of water around the heating system. So, if this is malfunctioning, it’s going to lead to a circulation problem.

However, the problem might not be limited to the heating pump. The issue could be:

If the pump is causing the E109 fault code to be displayed, will I need a new one

Your boiler engineer will need to assess the pump for damage, air locks and debris build up. It’s only then that they’ll be able to determine whether a new pump is needed.

Is my pump too small to work with my heating system

Although it does happen, it’s unlikely the original boiler engineer has fitted a boiler that doesn’t have the pump capabilities to match your heating system. However, if you’ve added multiple towel rails or radiators (for example, in a new extension), it could be that the boiler you’re using is no longer capable of providing sufficient heat.

If this isn’t the case and the boiler has always had a circulation issue, have your engineer check the speed on the pump. Typically, pumps will have three speed settings. It might be that somebody has turned down the pump and the flow rate is now too low.

If the flow rate on your pump is too low, your boiler engineer can simply adjust the flow speed to work in line with your property.

What damage can occur on boiler pumps

Old age is a killer of heating pumps, but so is water damage. If the pump’s seals have been leaking, it could have dripped dirty heating water onto connections and wires.

If this is the case, this is going to make the pump work intermittently, and this could explain the circulation fault you’re experiencing.

Whereby the connections and wires aren’t physically damaged, the boiler engineer will need to check the pump’s operation and test it using a multi-meter. There’s a small chance that boiler vibrations have caused wires and connections to come loose and again, that will contribute to the circulation fault you’re experiencing.

My boiler engineer thinks the pump is seized, how does this happen

It’s unlikely your pump is fully seized if the E109 fault code is being displayed, as this is a “poor” circulation fault, not a fault relating to “no” circulation. Essentially, the pump is still working to some degree.

However, the bearings and shaft could have worn considerably, and this could mean that the pump isn’t working to it’s full potential. In these instances, service kits can be used to replace the bearings.

With older pumps, it’s a much better idea to simply replace the heating pump with one from a well-known manufacturer, that will come with a warranty.

You should expect to pay around £250 to have a replacement heating pump fitted. And if there’s a choice, we’d suggest buying one from quality heating pump brands such as DAB or Grundfos.

It’s extremely difficult to guess whether air is in a heating pump (or any part of the heating system, for that matter). However, if you’ve been noticing popping in radiators, or banging coming from the pump, there’s a good chance that this is small pockets of air in the heating system. This air is going to restrict the pump’s ability to circulate water, and it needs to be removed.

The best thing to do, is go ahead and bleed the air from the heating system. Your engineer will be able to bleed towel rails, radiators and even the heating pump.

There are lots of parts in your heating system that can get blocked with debris. In the case of the heating pump, we find that central heating sludge is the most common cause of a blockage.

Heating sludge comes from minerals in water, but also rust that breaks off from the inside of radiators, towel rails and pipe work. As this sloshes around the system, it creates a thick, dirty water; heating sludge.

Typically, this sludgy water won’t cause major problems. But, it’s the pieces of rust that haven’t yet broken down into sludge that do. They’ll get stuck in all sorts of parts, including the pump.

When they do, they then get surrounded by heating sludge and that’s what causes a blockage. The pump has restricted flow due to this blockage and that leads to a circulation fault such as the E109 code you’re currently seeing.

Will I need a new boiler if heating sludge is present

Hopefully, the problem has been caught early enough that it’s not caused extensive damaged. Your heating engineer will be able to hot flush your heating system with chemicals, removing most sludge from your system. They’ll then clean out the pump.

Now all sludge is removed, they need to stop this build-up happening again. And the best way to do that is to dose the system with central heating inhibitor and fit a magnetic filter on the return side of the boiler. The inhibitor will break down heating sludge, so the filter can catch it.

Like the heating pump, the heat exchanger can get blocked with sludge. But something even worse, is limescale.

Secondly, if you’re living in a hard water area, you’ll want to dose your system with limescale inhibitor and then get a limescale filter fitted. This will help to catch limescale before it makes its way to the heat exchanger.

The thermistors monitor flow and return temperature. If these temperatures are not within tolerance, the PCB will lock out the boiler until the problem is fixed.

So, it stands to reason that if the NTC thermistors are faulty, they could be logging incorrect temperatures. That means the boiler is shutting off when it doesn’t need to.

You’ll need to get a Gas Safe engineer to test the resistance readings on both NTC thermistors to rule them out as the problem.

The fault code reporting system and all electronic boiler parts, are connected to the PCB. And, that means that when the PCB malfunctions, it becomes extremely difficult to diagnose the problem. The PCB could be indicating a circulation fault, when really the fault lies with incorrect fault code reporting from the PCB.

Like the NTC thermistors, your boiler engineer will be able to test the PCB using a multi-meter to check that this isn’t the root cause of the E109 problem with your Baxi boiler.